No, I am still running the standard bonnet with the air scoop blocked from the inside.

Just a note on underbonnet temperatures. They can get abnormally high without influencing the engine water temperature. But they can damage/ shorten the life of other things under your bonnet. Dual batteries for example last longer in a cooler environment or the crank battery for that matter.

I would leave it unblocked, it will drop the air temp around the engine something...
With great Power comes Great Fuel Consumption

What is so bad about “excess” underbonnet air?
If anything it should help cool underbonnet temps?

After the Lexus conversion in 2011 I have kept the 3D scoop on. It has never been an issue. So why block it off?
Skilpad, Shortie & Toro.
Top

Never looked at what shape it is, but if possible it would probably be more efficient at venting hot air to turn the scoop around so that the opening faces backwards?
Mag ons ons kenniskry met lekkerkry aanhoukry.
Top

Basically turning it into a cowl induction set up?

I just learned something new!
Top

It is shaped so that it cannot be put on back to front.

I used to race motor cars (classic Alfas) and won the championship 3 years running for classic marque cars (pre 1975 street legal cars) in a 1969 1750 Berlina. In all those years of racing, I learnt a lot about cooling. I managed the cooling so well that I ran my Berlina with a standard radiator without a fan because I understood the dynamics of cooling of a vehicle's engine and also because a fan robs an engine of power. This included sometimes standing idling and even revving on the grid for sometimes as long as 5 minutes.... (see a picture of this car at Zwartkops at the bottom of this post)

One important factor is to block off as much airflow from getting into the engine bay without it first going through a cooling device such as a radiator and/or an intercooler. That is my reasoning. Chris from Cirrus also advised me to close the intake off or block it, as his experience taught him the same principal.

Many years ago, Basil Green fitted a Mustang V8 engine into the Ford Granada Ghia and called it a Ford Granada V8 Perana. Ford USA's head honcho was so impressed, he wanted to acquired one for himself, but Basil Green refused to sell him one at that stage.

The problem was that the V8 Granada overheated and no matter how big a radiator and how many electric fans they fitted, they could not solve the problem. In fact, the fans made it overheat even sooner!!

After many months they eventually found the problem, and a simple deflection plate above the radiator solved the problem. Air takes the route of least resistance, that is an undisputed fact. So what does that have to do with the problem you may ask?

Basil Green fitted a plate to the front bulkhead, just above the grille, behind where the bonnet clip is situated , blocking the air route over the radiator into the engine bay. This solved the problem and led to the Ford Executive eventually receiving his long awaited Granada Perana V8 in North America!!

So, too much air, going into the engine bay via the wrong routes, can and probably will cause problems, more so on a turbocharged vehicle where the under bonnet temperature needs to be correctly managed. With the scoop directing cold air through the intercooler, this helped keep the temperature down. I would rather err on the side of caution after Chris from Cirrus confirmed what I suspected.

Notice the number "1" on the right front of the bonnet in the picture below. The number "1" indicates the current champion, for those who do not know. 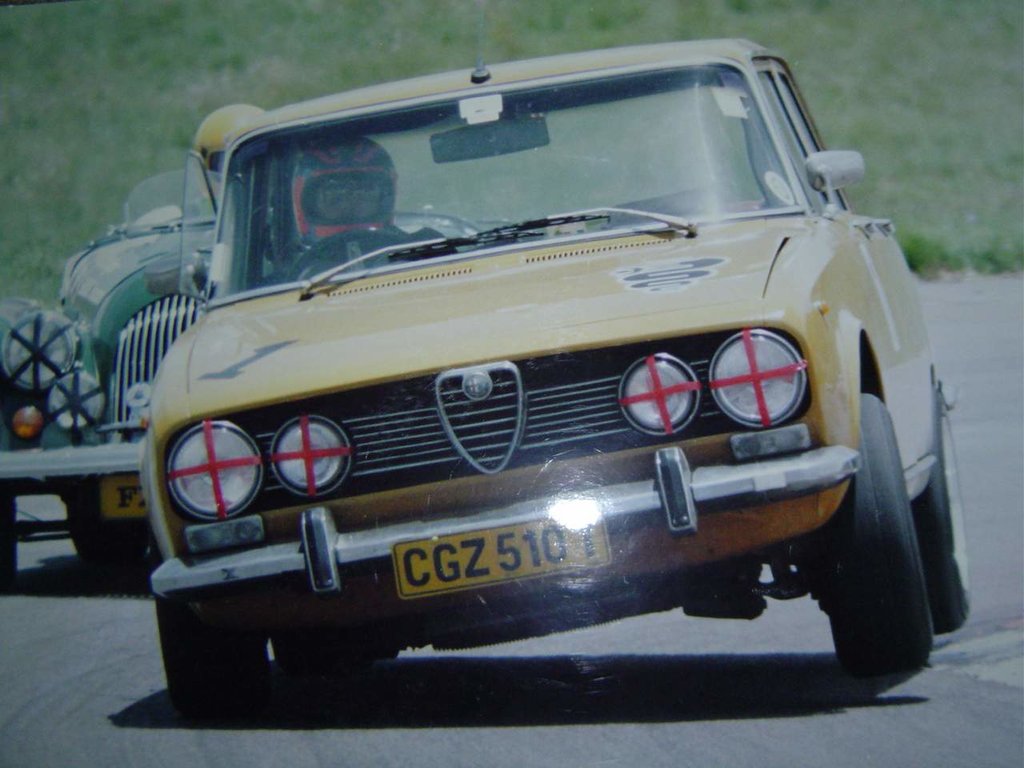 My thinking was more along the lines of drawing air out of the engine bay, thus increasing the airflow through the radiator, from the point of view that the area on top of the rear half of the bonnet is known normally to be a low-pressure area.

Whether or not this would work would depend very much on the specefic vehicle, and I wouldn't recommend doing anything expensive, but if it was as simple as turning ther duct around... Pity it can't work.

This is supposed to be one of the major problems with top-mounted intercoolers...

I think for it to work as an intake cowl, firstly it would have to be a lot closer to the windscreen and secondly the intake would have to be re-routed. But I would NOT do this on an overland vehicle, as the chances of drowning the engine would be increased exponentially in my opinion.
Mag ons ons kenniskry met lekkerkry aanhoukry.
Top

My worry these days ai the bumper design of my Patrol [a Burnco ] And yes, Many discussions evolved around iNyati's scoop, air going nowhere and r"filling" the engine bay to limit air flowing through the radiator.