I am not sure whether the current streak of cold weather is due to my new grill, or to my brother who is busy cleaning his workshop for the first time ever, but this is about the coldest winter I can remember.

However, since fitting it, I have done a fair amount of driving (by the standards of the three months preceding and considering that I am still working from home). First there was the forum outing to John Rock. Coming back, I went past Northern Pretoria. Coming up the long hill past Rigel avenue I maintained a steady 105km/h (GPS) and the temperature peaked at 78 degrees. EGT peaked at 430 degrees, and the ambient temperature was 11 degrees. I can't remember ever getting up there at less than 90 degrees, but I am not sure I have driven it in such low air temps.

Today I went to Roodepoort. Taking the hill past the Flora Clinic, I maintained 80km/h all the way up (to do that I need about 0.9 bar boost). EGT's peaked at 530, and water temp at 78 degrees. On the way back, driving up the hill before the N1/M1/N3 interchange, I accelerated to 125km/h (GPS) and maintained that speed all the way up. EGT's hovered around 430-450 all the way up, and maximum recorded water temp was 82. I think ambient temp was around 18 degrees.

On all of these hills, I am used to having to slow down to prevent my water temps from exceeding 100 (which is my sphincter's maximum comfort level). Again though, air temperature definitely plays a role, I am used to considerably hotter ambient temps and all this was with the car basically empty.

At this stage, I am not prepared to say that I have solved the problem, but I am pretty convinced that the changes have made a difference.
Mag ons ons kenniskry met lekkerkry aanhoukry.
Top

Malcolm, yes, it is a risk. However it has been in exactly the same place for at least ten years. I have once had an officer get a little up-tight about it, but only a little.
There used to be a diagram in the law book indicating from what angles and distances the number plate needs to be visible, and this setup conforms to that, although it seems that has been removed from the law now (or at least I couldn't find it in 5 minutes on Google).

The problem is there really isn't anywhere else I can put it that is both legal, not problematic to air flow and where it won't look like a ball of scrap sheet-metal after the first river trip...
Either way, if the recent changes haven't made enough difference, I may have to find somewhere else to put it, so I can put an oil cooler behind where it is now.
Mag ons ons kenniskry met lekkerkry aanhoukry.
Top 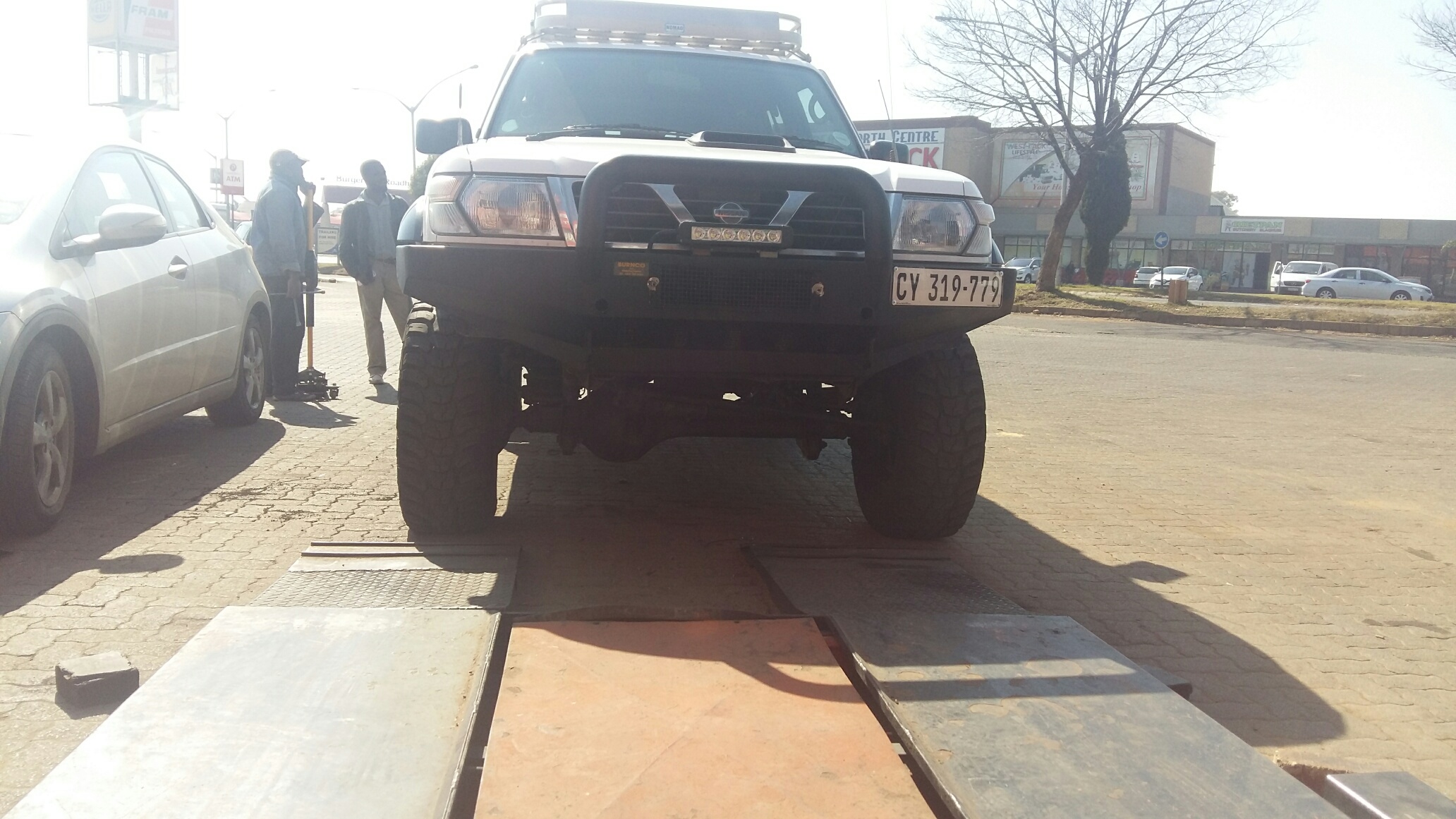 iNyathi s'n I moved because it was effecting air flow to the radtr - I hqave been through Botsw and Nam [Caprivi] a few times with it on the side and also through many road blocks, thus far no officer even commented on it.
Works for me :-)

Sent from my SM-G925F using Tapatalk

Some feedback:
Since fitting the new grill, I have been to the lowveld about a month ago, and to Dullstroom this weekend. We still haven't had any weather that I would describe as "hot" and I haven't yet towed my trailer (or any other trailer) anywhere.

However, since the new grill the maximum water temperature has never exceeded 95.

This weekend for example, we had 5 people in the car (and thus it was at or over the GVM), the ambient temperature was around 25 degrees, I had the air-con on all the time and I was travelling at 115km/h (120 on the speedo) all the way (including up the hills, traffic permitting).

Maximum recorded temperature was 91 degrees, and it only recahed 90 twice, and probably only exceeded 85 four or five times. Also, on the down-hill after the hill, the temp would normally drop down below 80.

On the way there, on the long hill after crossing the Olifants river, there was some road-works at the river, and thus I accelerated from about 80 to 115 on the steepest part of the hill. On this hill I got an EGT alarm (set at 600 degrees). I also had an EGT alarm on the way to the lowveld, on that long hill on the N1 north where the farm murder memorial is. Before the grill mod, I never had a EGT alarms, as I would always reach 100 degrees water temp before the EGT's got that high.

So the mod has definitely made a big difference. But, the temperature still rises (and relatively quickly) when the car works hard, and this will be worse on a hot day. So it's not like a modern car where you can forget about the temperature gauge completely. Whether it is now at the point where I can live with it remains to be seen. If not, there are still a couple of tricks in the sleeve.
Mag ons ons kenniskry met lekkerkry aanhoukry.
Top

Took my trailer to Rust de Winter this weekend, despite doing the bundu trail. As a result, the car was reasonably heavily loaded, because I had two sets of camping equipment, and I packed some unnecessary weight in the trailer as well. It was not quite as hot as last year, but I guess the temperature reached at least 32 on the way back.

Going up Rigel at 110km/h on the GPS and with the air con on, I needed to drop into 4th to maintain that speed so the car was working pretty hard. The temperature peaked at around 102 degrees, and oil temp peaked at 116 degrees. Unfortunately, I did not see the EGT's (the Madman was alarming for both water and oil temp so at the crucial moment the EGT's were not displayed, but they must have been getting close to 580-600 as well considering how long and how hard I had been boosting. By the time I had turned onto the R21 (I guess that's about 3km), the temps were back around 80 degrees.

Crawling up the hills while doing the trail, I found that the temperature would climb slowly, and I reached a maximum of around 90 degrees a few times. However, I found that, if I drop a gear (which increased the RPMs to about 1600) the temperature would come down 4-5 degrees. Thus, in this situation an auxiliary electric fan would help, if only there was room to fit one an the GQ. But, the situation is manageable. Michael tells me that officially the TD42's ideal operating temp is around 90 anyway, so not something to worry about yet. Also, RDW's uphill sections are pretty long and one seldom crawls for such a long period anywhere else.

Thus, I would say that the situation is now bearable. I would like to get the temps a little bit lower, but to get there I would need to increase the complexity of the system and thus introduce more failure points, and I am not sure the risk is worth the reward. Definitely the temperature can now be managed with the accelerator pedal, and also I am convinced that I now have better control over the temperature than I did with the petrol engine, the difference is just that the diesel engine is capable of working harder, and thus generating more heat. I would not have been able to maintain 110km/h with the trailer in tow up Rigel with the petrol engine.

But I do now have another issue to take care of. When the under-bonnet temps get high (IE the car has been working hard for a fairly long period), I lose vacuum pressure at low revs, and therefore I lose the ability to brake coming down the worst of the obstacles. I am not sure whether the pump is failing or whether there is a leak that only occurs when the pipes get soft from the heat (although my gut says they should seal better when they are soft).
Mag ons ons kenniskry met lekkerkry aanhoukry.
Top
Post Reply
119 posts

Users browsing this forum: No registered users and 11 guests