The repairs list was extensive but Moegatle was the goal and the only way this car was going to redeem itself was to make it up Koos se Klim.

First up was the fuel tank. I tried to find a replacement long range tank but no one had any second hand so I decided to repair. We have neighbor that can weld stainless steel and he was immediately nominated. My fuel gauge also stopped working along the line so a leaking fuel tank and no indicator made things work on faith. Seems the welding on the baffles on the inside of the tank tore loose and moved around so it seems that caused my gauge to hiccup. To be honest I expected the tank to eventually leak when I installed it because I heard so many stories about long range tanks. I still have the original tank in storage but it was just not an option for me because I am not going to carry jerry cans to drive 600km. I might put one diesel jerry for a solo trip for incase something like this happens again. If you have two separate tanks fuel is carried in I don't think its necessary but I only have one Main tank. 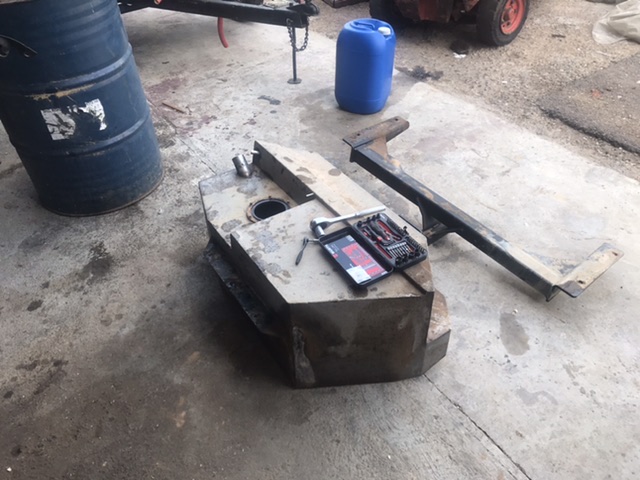 Aircon was sorted out by our trusty scrapyard of Oom David.

Exhaust was sorted by the awesome guys at Viper.

Suspension must still be looked at but I have spoken with the guys and they sound optimistic that it is sortable.

The major issue was my cooling, after all the effort of adding oil coolers and the risks they pose to just end up worse off than where I started was just draining my battery.
So firstly I removed my intercooler, temperatures were awesome but I couldn't drive up a hill faster than 100km/h EGT's were just terrible and shot through the roof.

So I was standing one afternoon looking at the car and noticed it dripping again, thought it was the aircon... it was the radiator.
Now the radiator was almost 2 years old and had its own drama when I replaced it back then but 2 years is a bit young considering the old one did 20 years.

Seems its just a crappy built radiator and rocks and dirt got between the mounts and the core and the suspension did nothing to help so every time I hit corrugations it lost pressure and the temps shot up. So I took it out and sent it to Silverton Radiators. They cleaned it nicely, I also cleaned the intercooler and aircon condenser. I replaced the cap from 0.9 bar to a 1.1 and Reduced the antifreeze mix from a 1:2 to about 1:3 and added a bottle of waterwetter.

Next major job was to close up all the sides because since the body lift there hasn't been any rubbers in to help direct airflow under the hood.
The most crucial one is underneath the radiator where I took a bit of insertion rubber and fixed it at the front just underneath the winch plate and it is free hanging mostly past the read with a few cable ties around the front panhard of the suspension so it always has the maximum amount of gap and least amount of risk getting caught on rocks and it survived Moegatle like that with a lot of flexing so I think its a win. 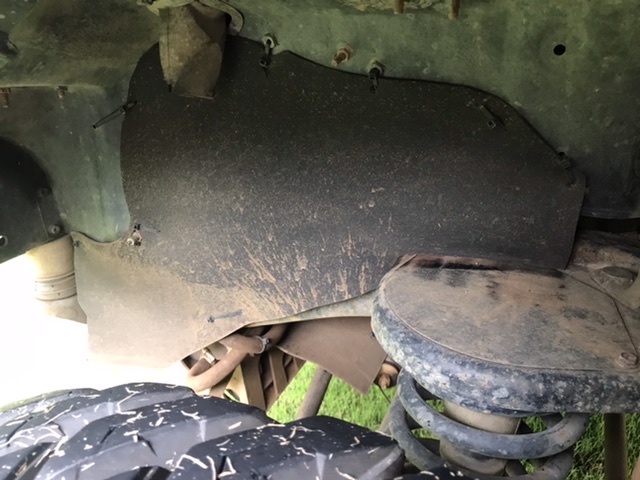 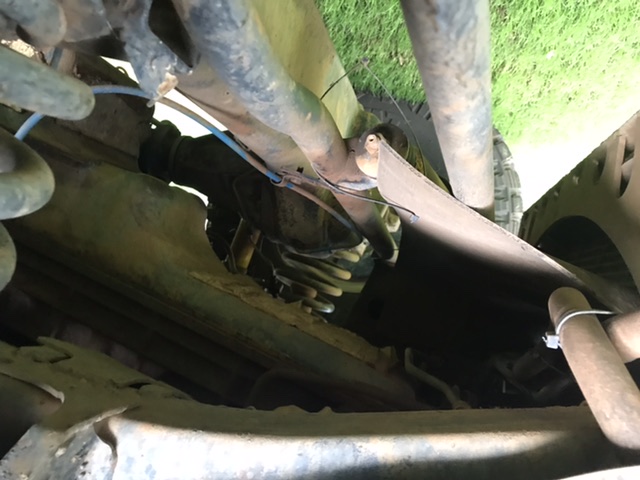 I removed the bumper and printed a scoop to help force air through the oil cooler. 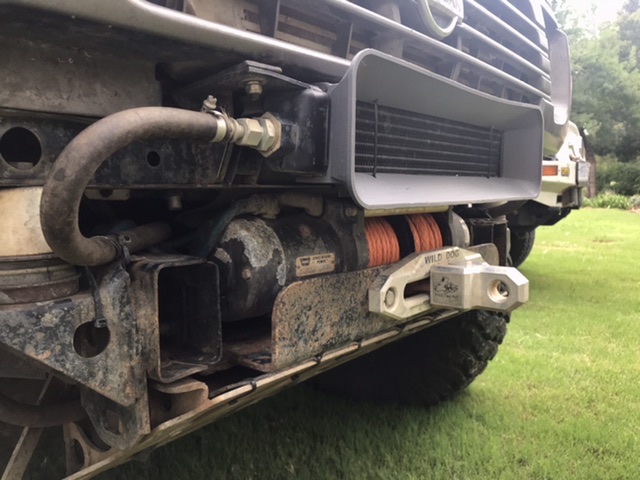 Now with some short term testing things look great, for the first time ever after the car gets to operating temperatures past 80 degrees it actually cools down below 80 degrees

I have never seen that happen. I drove 300km on friday through traffic and lots of hills (was a bit of a cool day) I drove it very hard especially uphill keeping EGT's to about 600 and the maximum water temp I got was 98 degrees.
Now for a GQ on 35" that is very significant.
I think a Snorkel is also going to help a lot. Maybe a nicer turbo aswell but its awesome to be back at an EGT' cap instead of water temperatures. 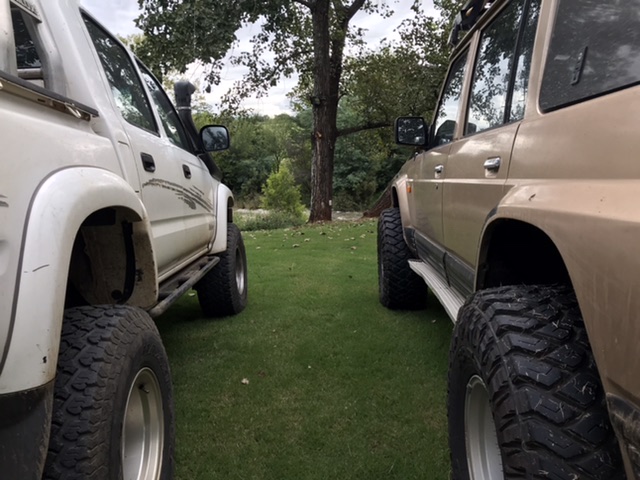 I have made peace with the car again and do not expect the TD42 issues to disappear, I knew about the before and would probably still have gone the same route if I knew then what I know now.

I don't think I will ever be able to tow 4 ton while on 35" tires 120km/h up a hill without having to worry about the madman. Considering all the options including my driving enthusiasm I cannot think of another vehicle that will handle me like this car does.
I have made peace that I might be in unfortunate circumstances again just as I have been in the past because of the cars age and well... my driving enthusiasm

but I am as well prepared to handle them as I think I can possibly be and will definitely invest in a satellite phone before my next solo vehicle trip. We did have a satellite phone on this trip just in case but luckily didn't need it.
I am very fortunate to know people close to me that can come and assist me in such situations and a great forum of guys who have helped many in such circumstances. I am also on that list to help if anyone needs it.

But that's not me, I have seriously considered getting a GU but..... there might be a chopped GQ in the future.

What ugly piece of car can go from: 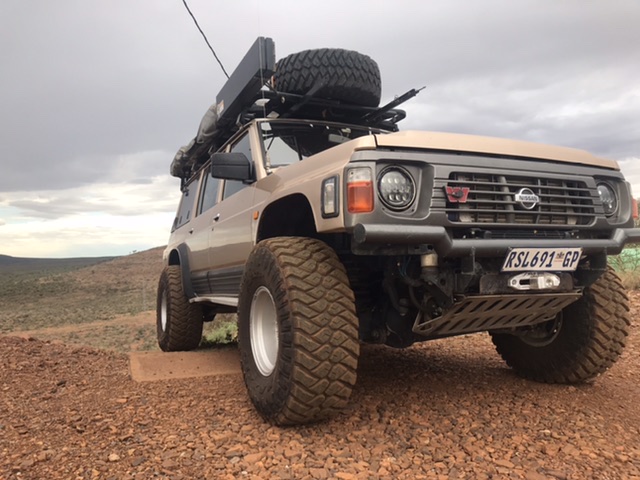 BTW it did make it up Koos se Klim:
Some Awesome picks from Peter Connan, Desmond Meyburgh and Chris Vercail. 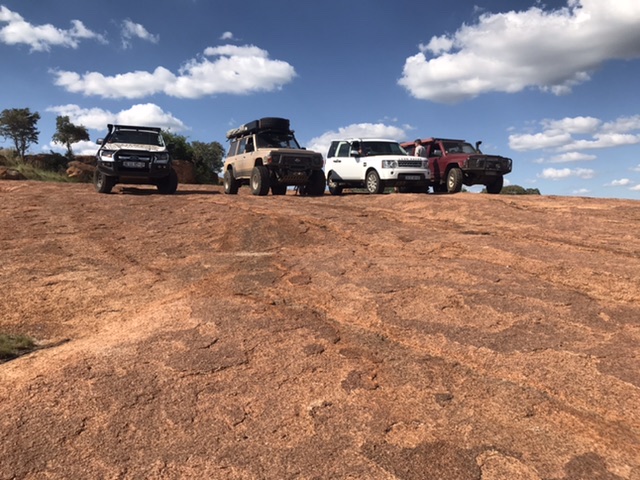 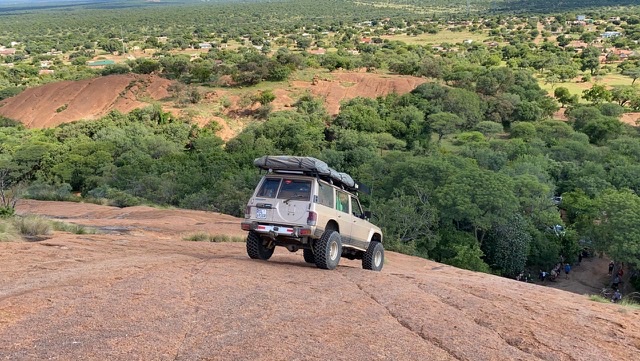 Tijmen, again I have enjoyed your tales of ups and downs with your koolstoof. You are a remarkable man.
Intelligence is measured in smarts, stature is measured in hearts
Top

Side note:
Ek het n Iveco daily oorweeg vir lang termyn goal toe lees ek op die forums “I have owned a 80 series and Defender, the Daily is definitely the most capable vehicle I have owned but also the most unreliable”


So daar is hoop.

So with lockdown being fun and all I surprisingly didn't work a lot on my car. So post initial lockdown I did get into a few projects.
First up was some repairs. The rubbers protecting the rear bushes on the brakes needed replacing, while replacing them I noticed something didnt look right with the top trailing arms hoding the diff. I had snapped 1 of the TOP trailing arms

Don't ask me how but up to date I managed to break each component holding my rear diff to the car.

Next was Rocksliders. I went with Peter's approach to body mount them instead of chassis mount. Lots of many reasons why and Time will tell (Possibly a few big boulders aswell) 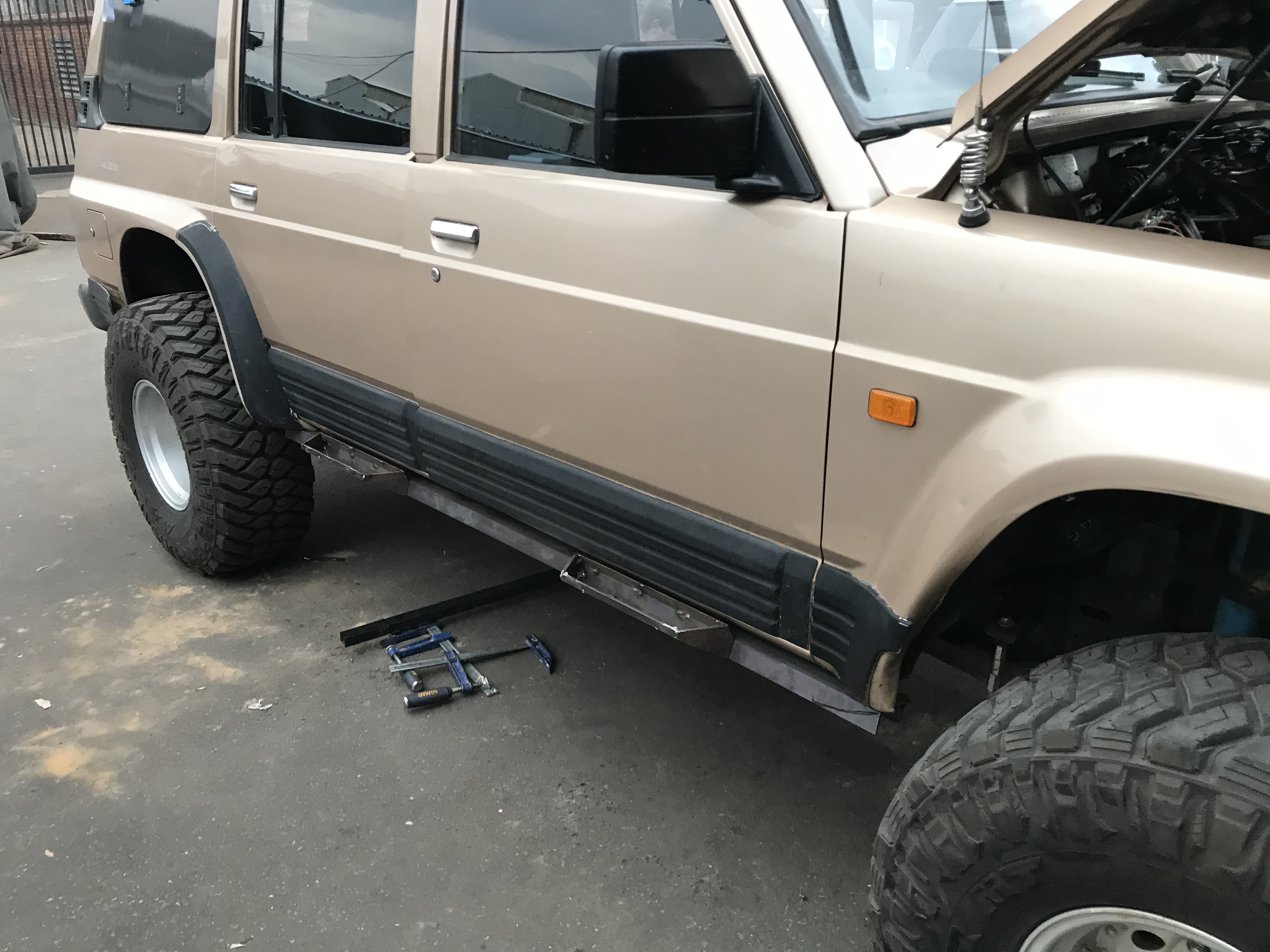 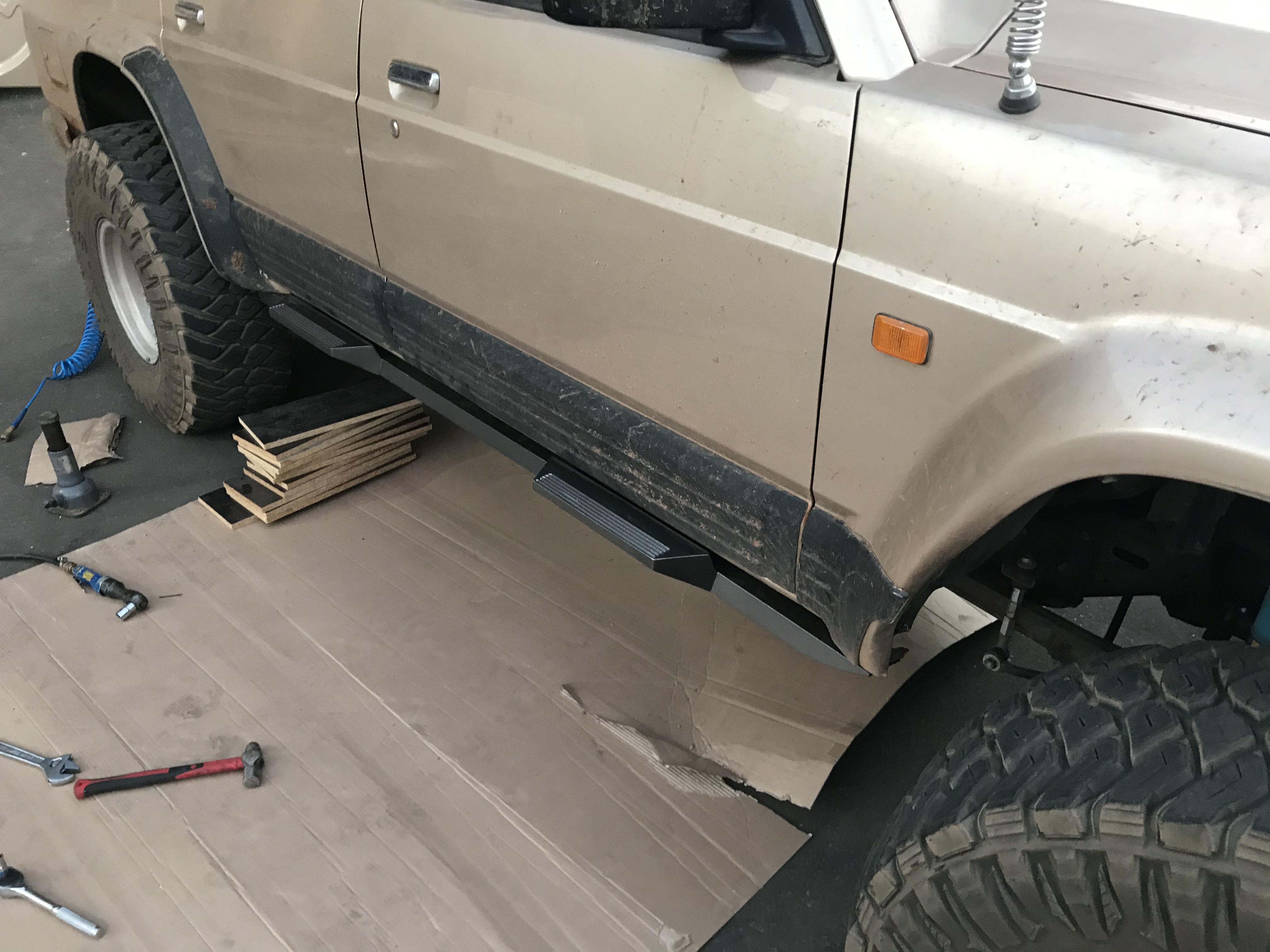 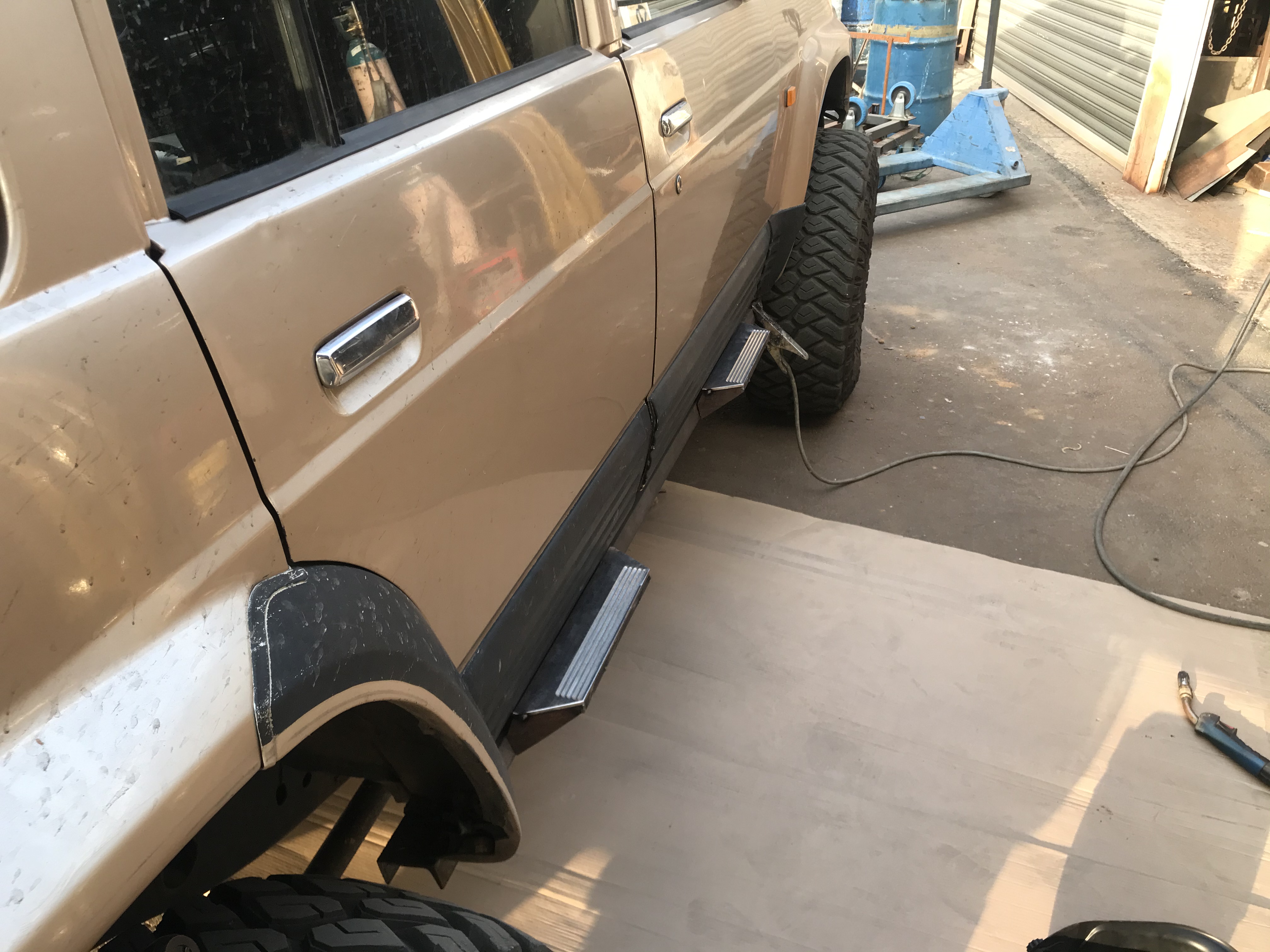 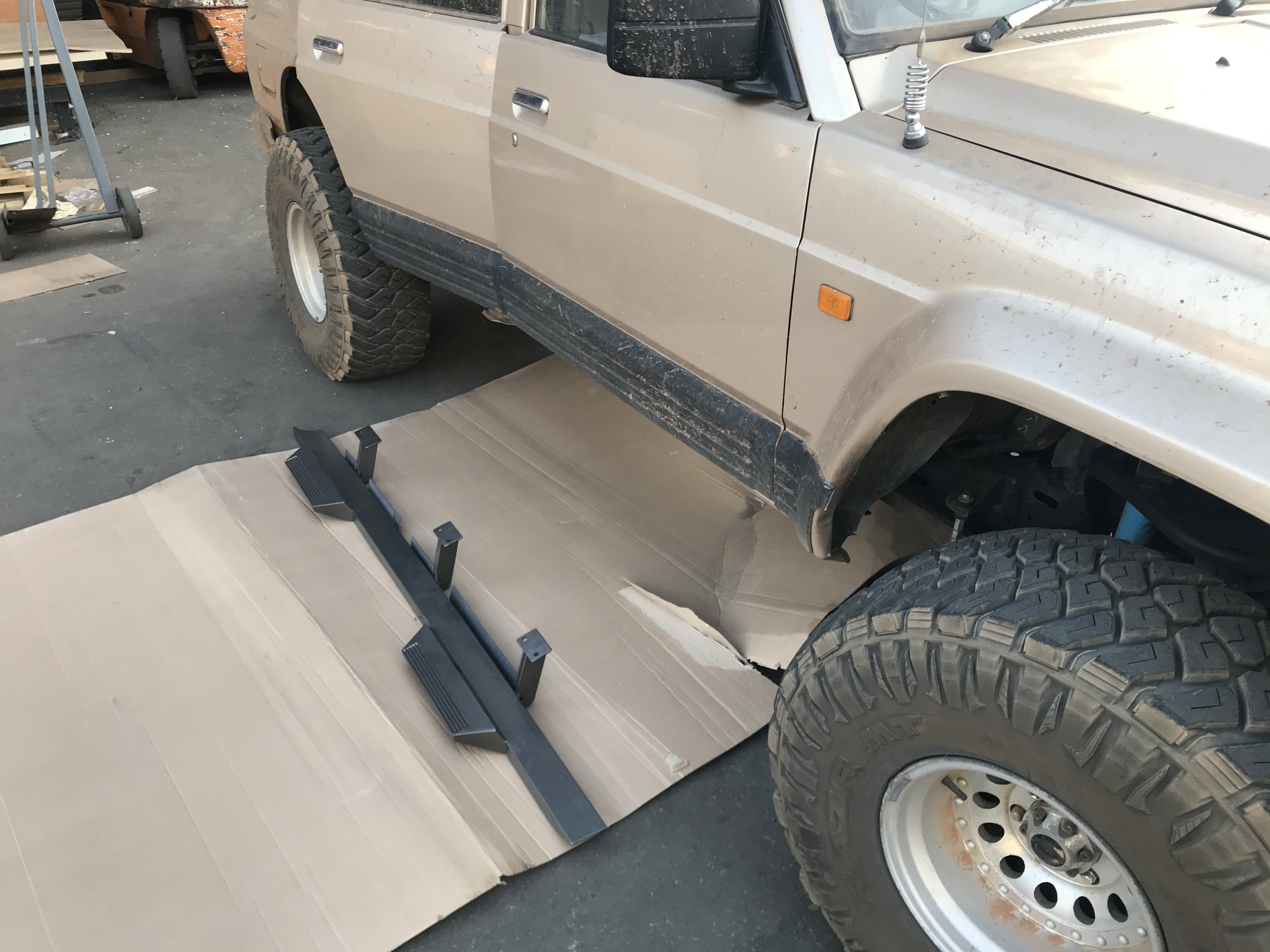 Lastly was a project I wanted to do for 4 years now but never had the courage to tackle it and that was to mount an additional aircon compressor to turn into a aircompressor for tyres and the airhorn.
I was actually quicker to fit the compressor than to build rocksliders. It was only possible because I had previously done the 50mm body lift. It is running of the open groove on the alternator and I used a belt from BMG that is adjustable to any length by adding or removing links just like a chain. If it lasts a year then I will replace the front pulley with a larger one for a bit more airflow.

I also used braided hose up to the tank. The connect it fitting type hoses did not last 2 minutes with the heat. It is also coupled to a regular compressor pressure switch with a light on my dash so I know if something is wrong and it doesn't turn off because it starts up with the engine and maintains pressure permanently. 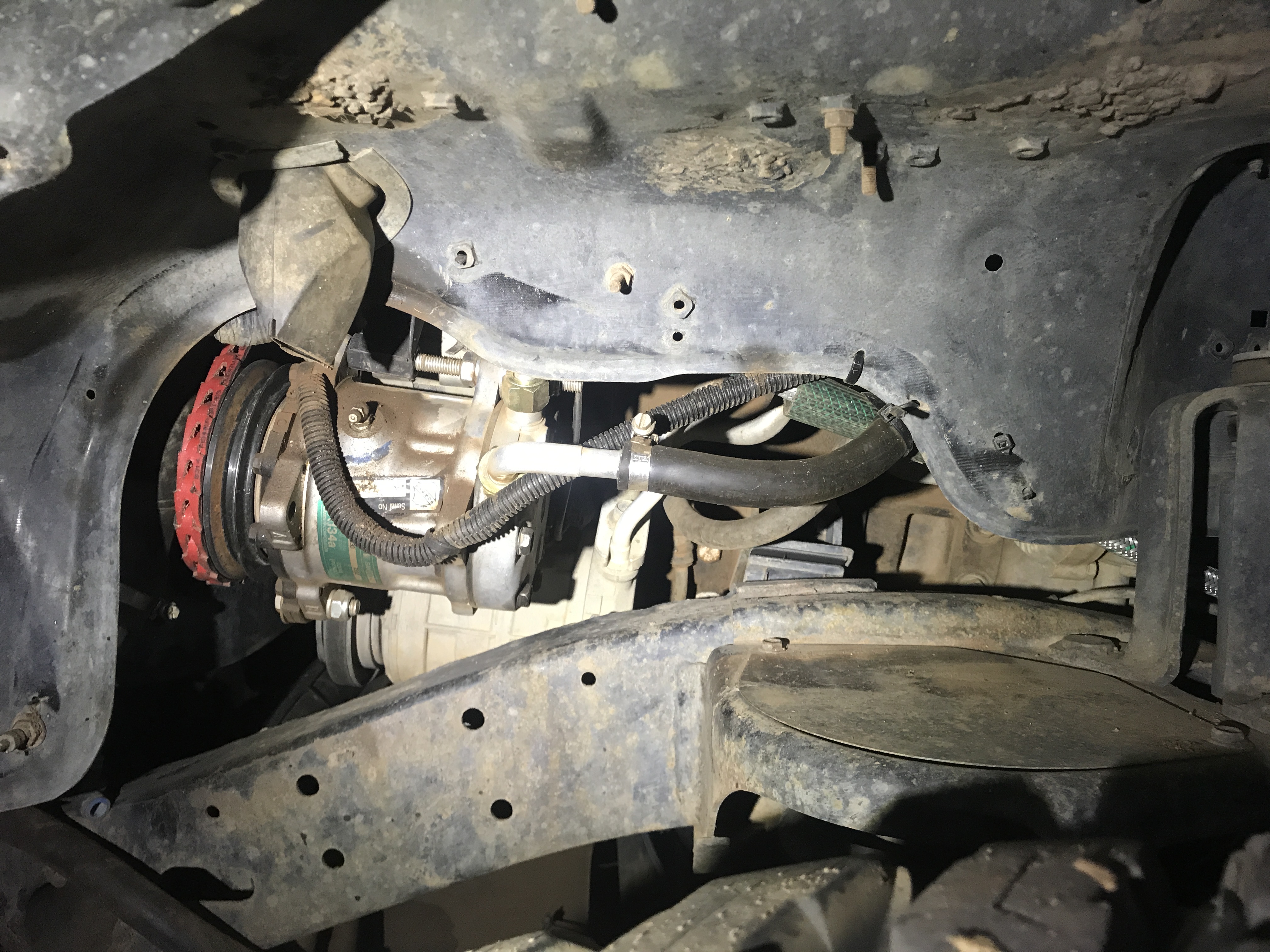 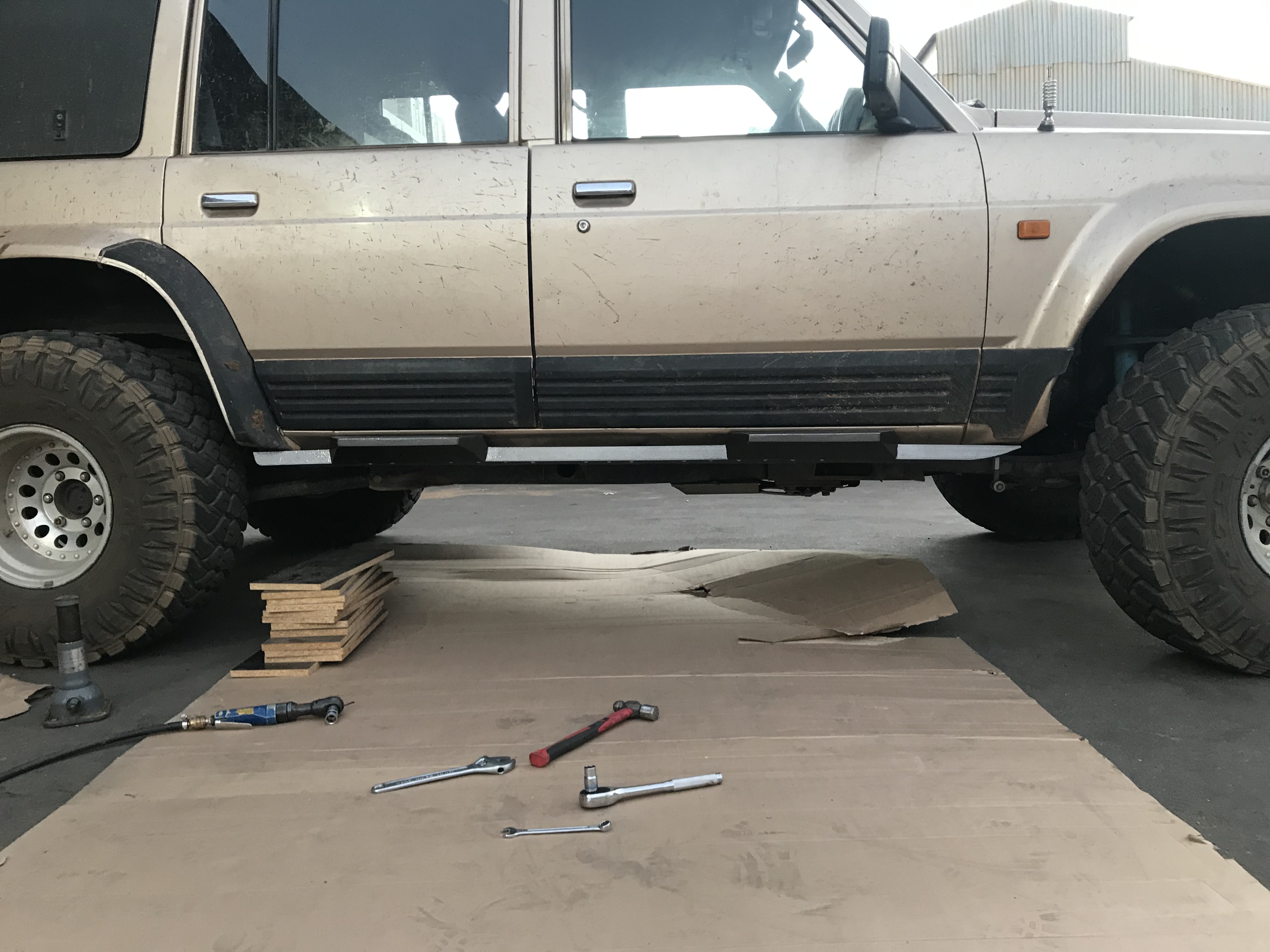 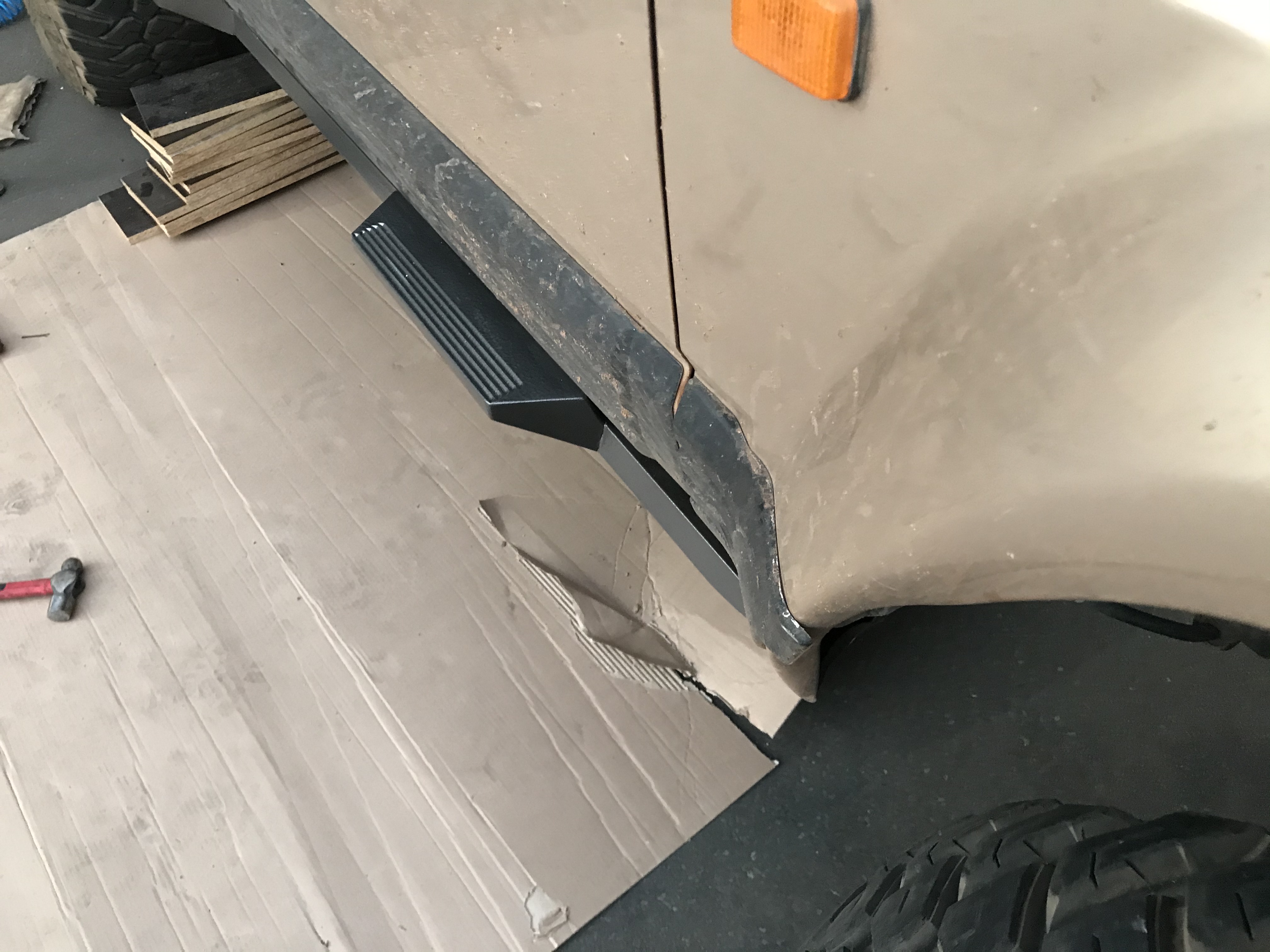 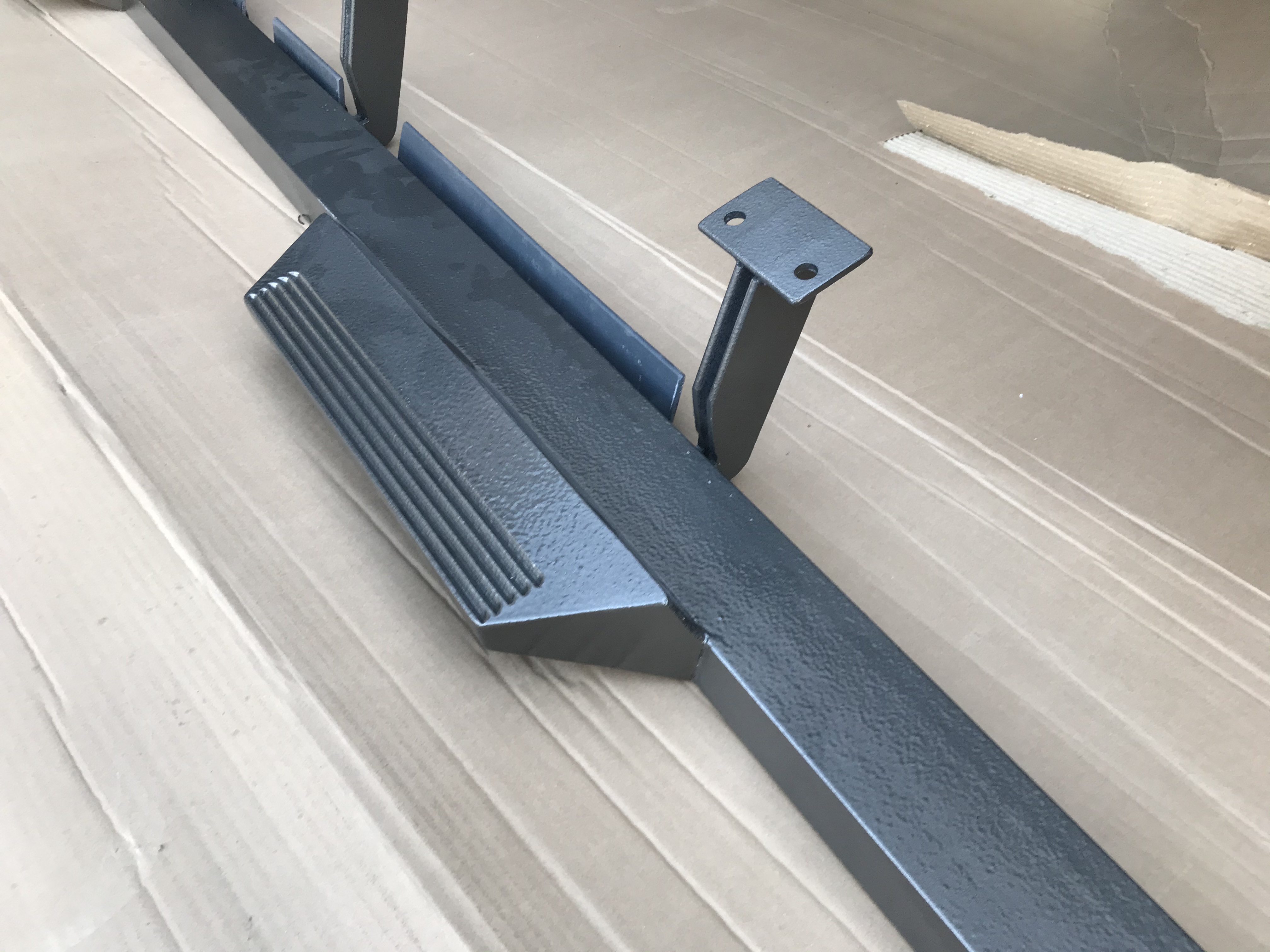