Random thought while reading this thread and a point for you diesel guys to maybe consider when having EGT troubles. I had an EGT temp problem on a Colt that I couldn't figure out till I eventually replaced the sender probe with a new one and all EGT problems went away. I buy from MGL Avionics

Has anyone tried smaller pullies on the water pump - to speed up flow a bit ?
(Especially in conjunction with a larger radiator...)
2000 Patrol GL 4.2D - Still strong after
Eight Hundred and counting THOUSAND KILOMEEEEEEEEEEEEEETERRRRRRRRRRRRRRRRSSSSSSSSSSSSS
Top

Spike, it certainly seems like EGT probes don't always last very long. I firmly believe mine is still OK, as my EGT's are broadly similar to other guys I have spoken to and within the same band from the beginning. But EGT is not my issue, water temp is.

Rudolph, I don't know if anybody has tried it locally. There is a lot of argument/discussion around this and aftermarket high-flow water pumps among the Australian TD42 crowd.
Broadly, it seems like just speeding up the factory pump does more harm than good, as it introduces cavitation. Thus is may increase water flow for a little while but in the longer term the pump eats itself and you actually end up with less flow.

And whether increasing the water flow (by using higher flow pumps, either replacement mechanical pumps with tighter tolerances around the impeller or powerful electric pumps) actually helps with temperature control is a big argument. Some guys swear that it has helped, others that it doesn't. The theory with why it should work is based on the idea that you can carry heat away from the engine better. The theory why it doesn't is that this water now spends less time in the radiator, thus reducing the amount of heat transfer between the air and the water.

Even increasing the volume of the radiator is a point of contention. If you could increase the frontal area of the radiator, that would definitely help. But the hole in the GQ's valance is only so big, and the factory radiator fills it pretty much completely. And there's lots of stuff around the hole in the valance, so one can't really make it wider.
Therefore the only way to increase the radiator's volume is by making the core thicker. This of course results in lower efficiency, so again, some say it helps, some say not.

The one thing that does work, and about which there is no question, is that the more cool air you force through the radiator, the better. So that is what I am concentrating on at the moment.
Mag ons ons kenniskry met lekkerkry aanhoukry.
Top

Would water onto the radiator help to cool it down?

What is the main underlying problem here? Is it all down to the opinion that td42t battles in a GQ?

My small brain is confused that this conversion is giving problems but it’s a tried and tested conversion of michaels?

Is the radiator absolutely up to the job, and correct quality?
Top

Yes, but you need quite a lot of it and where do you carry all that water? And what happens when the pump fails or it runs out? That kind of thing is fine on a race car, but not for long trips.

Graham, my temps are similar to Tijmens. I believe they are actually similar to Dirk's as well, but he travels slower than I want to. So this is a known issue of the GQ.

And to be honest, it is possible to control the problem with one's right foot. As mentioned though, I am an impatiant bugger. I want to get the long tar sections before one gets into the bush over and done with with the minimum fuss, stress and wasted time possible.

Next mod is temporarily done. Spotlights have been moved away from the radiator. 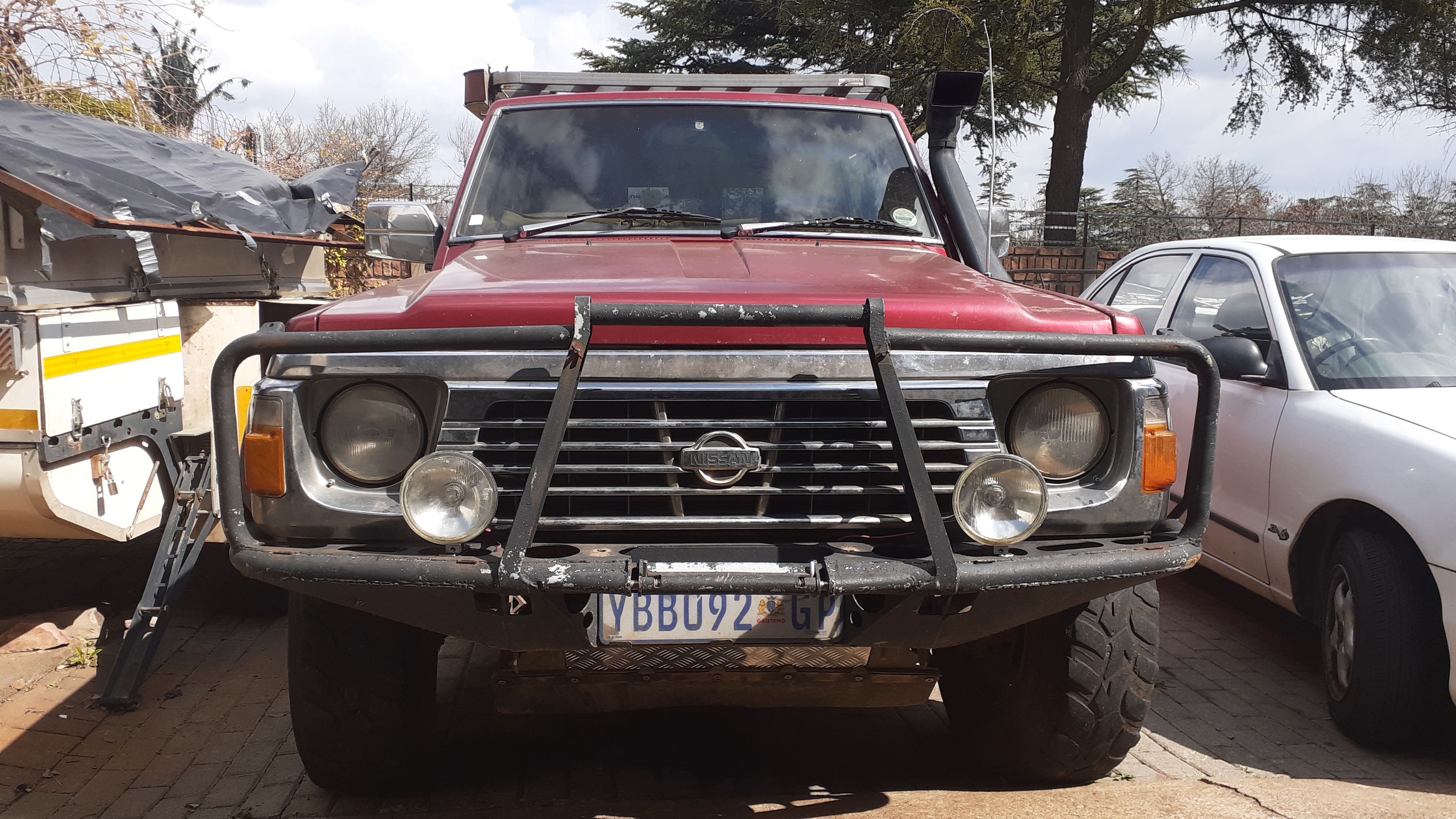 When towing I dont mind my heat going to 101 but wil slow down even more to keep it there.

I was thinking of water only for when hitting those inclines and being able to spray fine mist on radiator?

Also want to replace my spotlights with same as Chis Ford. Looks like 2 small light bars.


Sent from my SM-A530F using Tapatalk

When towing I dont mind my heat going to 101 but wil slow down even more to keep it there.

I was thinking of water only for when hitting those inclines and being able to spray fine mist on radiator?

Also want to replace my spotlights with same as Chis Ford. Looks like 2 small light bars.


Sent from my SM-A530F using Tapatalk

My brother had a system like that in his Mini. Had a 20l water can in the boot to drive it, and he needed to re-fill it every couple of days just commuting between JHB and Roodepoort. The Mini's radiator was only about a foot square.

Have also been thinking that short light bars are actually the answer, and hopefully the cops don't have issues with those as well. If you find them at a decent price, let me know?
Mag ons ons kenniskry met lekkerkry aanhoukry.
Top

Ok, so you’re putting it down to a GQ thing?
Sorry. I ask for interest sake, as well as selfishly as a worry about my conversion happening on my GU at the moment.

It’s strange though, at first glance a GQ grill looks like there’d be more airflow than a GU
Top

Graham, in the last couple of months I have had the opportunity to drive Michael's car for a day and Tinus's bakkie on quite a lng trip, down to Hoedspruit and back.

Both have substantially less issues with temperatures than mine, despie having considerably more power, and me using that additional power.

I think it is primarily a GQ thing, and I think there are three major contributing factors:
1) The GU has a bigger radiator.
2) The GU has a longer nose. Thus the three radiators have considerably bigger gaps between them. In the GQ, the radiators almost touch eqch other.
3) This is something I may well be wrong about, but if you look at a GQ's grill, the top 100mm is solid. The total height of the grill is only about 300mm, and I think a lot of the air that could possibly go through the radiator is forced over the top of the bonnet.

I could be wrong about this last bit, because air does funny things sometimes, but plans are afoot to test this theory. However, it can only be done after lock-down ends.
Mag ons ons kenniskry met lekkerkry aanhoukry.
Top
Post Reply
90 posts