So I got a huge surprise today.

Before I did the conversion, I totted up all the fuel I'd chucked in since the Great Botswana, and got a fuel consumption of 3.86km/l. Over the river trip last year, I had the GPS running all the time, and culculated that the tires I have on require a 4.5% correction, so my true fuel consumption on the petrol engine for the last while was 4.04km/l.

This really surprised me, as every tank of fuel I have calculated individually gave me somewhat less than that. The above was done on a mix of fuel, mostly pump diesel (500ppm where possible, but the stuff is getting scarce now), but at least 400l of it has been biodiesel.

Oh, and the reason I did this calculation now: On Wednesday last week Michael upgraded me to a 11mm fuel pump...
Mag ons ons kenniskry met lekkerkry aanhoukry.
Top

Hows it now with the 11mm? Is there a noticeable difference?
Top

Graham I obviously can't comment on fuel consumption or temperature management yet.

The mojor difference that is immediately noticeable is that the usable power band ends 500rpm higher on the rev range. With the 10mm pump I can see (and feel) the boost starting to drop away by 2700-2800rpm. With the 11mm pump, the boost at 3300 is similar to what it was at 2800.

The boost also seems to come in just slightly earlier, but I am not sure about that.
Mag ons ons kenniskry met lekkerkry aanhoukry.
Top

I neglected to mention, a few months ago (long before the 11mm pump), I modified the exhaust system.

Initially, the system comprised a 76mm down-pipe, extending to somewhere next to the rear end of the gear-box. At that point it closes down to 64mm, and passes through a free-flow silencer next to the rear prop-shaft and exits in the normal place.

In the 76mm section next to the gear box, I got Viper to weld in a cut-off mandrel bend in such a way that it forms a Y-piece with two exits. The one continues as before.
In the other, they fitted a 76mm butterfly valve with a diaphragm actuator. After the valve, the pipe continues backward, but ends next to the silencer, with the rest of that mandrel bend just pointing down at the ground. The diaphragm actuator is connected to the sensing port on the inlet manifold. The result of all this trickery is that when the boost rises above 0.1 Bar, this valve starts opening, and by 0.25 Bar it is fully open. So effectively when the engine is working hard, I have a straight-through exhaust with a minimum bore of 76mm, but while idling I have a silenced 64mm system.

This was done to try and get heat out of the engine faster, but I amnot sure it makes that much of a difference, although it does reduce EGT's quite a bit.

I also tried fitting an oil cooler in a new bash plate. However, because I mis-understood the way oil flows through the engine, I did it wrong and thus it was not effective. For those who may want to try that, the two oil filters on the TD42 are in parallel, not in series. So if you fit a sandwhich adapter under just one filter (like I did) and connect that to a cooler, effectively all you do is increase the resistance of that filter, and pump pretty much all the oil through the other filter. So this has been (possibly temporarily) removed again.

However, I suspect I still have temperature issues (but due to lock-down I haven't had a chance to properly test the combination of the exhaust and the 11mm pump.
Mag ons ons kenniskry met lekkerkry aanhoukry.
Top

However, I have decided to take the next couple of steps.

Firstly, in another complicated three-way deal, Tinus ordered a 30% smaller intercoooler from Michael, and then swopped me the small one for my big one. This smaller intercooler is the same size Michael now runs on his own car, and on his it made a big difference to water temps due to it exposing more radiator to cool air.

I have now fitted this smaller intercooler. This is what the old one looked like: 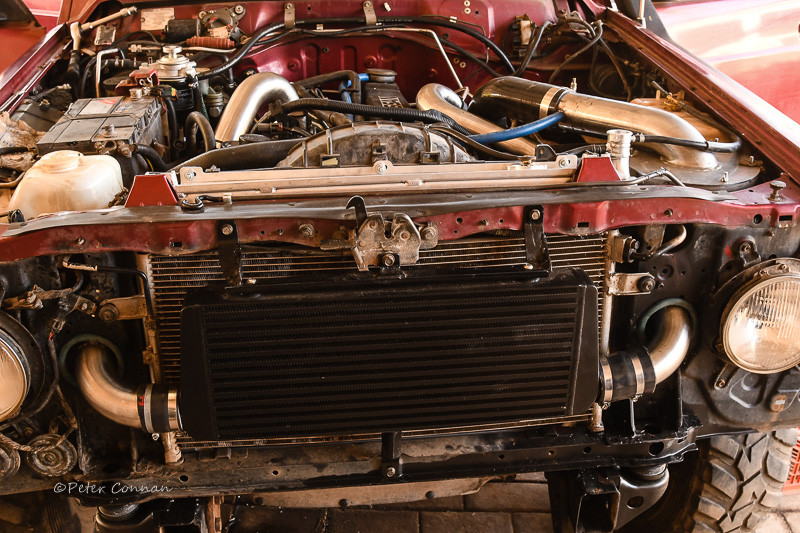 And this is the new smaller one: 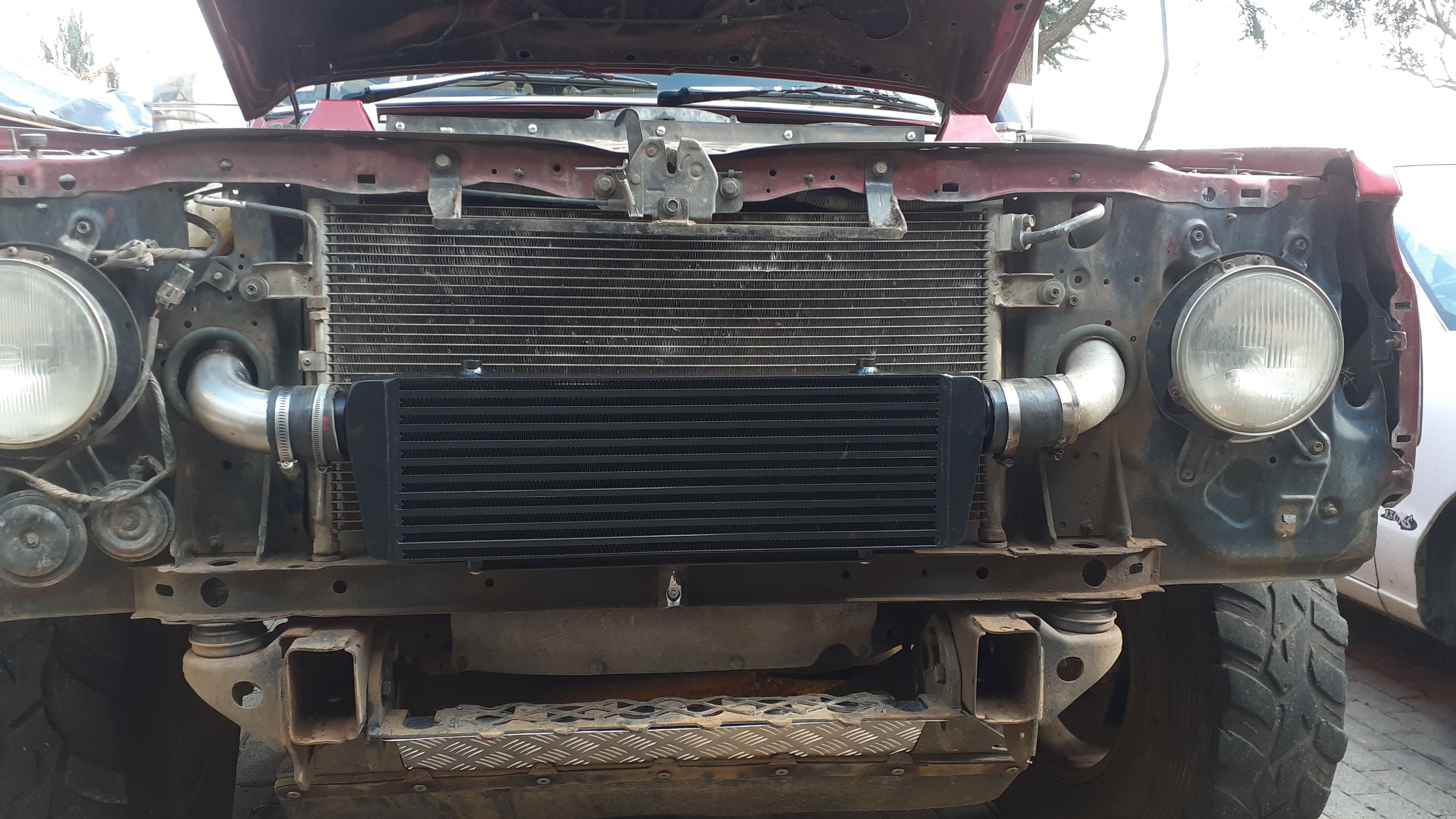 In effect, it is the same length and has the same size connections, but it is about 50mm or 30% narrower.

I am also taking this opportunity to re-locate my spotlights, moving them outward so they are not directly in front of the radiator anymore.

When lock-down ends, I also intend modifying the grill by cutting out the center portion and fitting a fabricated Aluminium one which has far more "slot" and far less "solid". But I can't do it until 1) the laser-cutting guys can do some cutting and bending for me and 2) I can get to somebody to weld it together for me.

Kind of throwing almost everything I can think of at the problem in one go now. If it solves the problem, I really couldn't care less which changes made how much difference...
Mag ons ons kenniskry met lekkerkry aanhoukry.
Top

How warm was the GQ running??

Dirk it depends on the conditions. But towing a trailer on a hot day, up to now I have been having to drive very carefully to keep it under 100.

Any significant time spent boosting more than 0.5 bar would cause the temperature to climb quite quickly. Ghat translates to around 100-110 on the level, and down to 80 on the longer hills.
Mag ons ons kenniskry met lekkerkry aanhoukry.
Top
Post Reply
90 posts