I recently got my Patrol TD 42 heating problem solved and i thought ill tell everyone what we did.

I have a 1999 TD 42. It was bought new by my uncle in 1999. It was one that Nissan did a Safari turbo and inter-cooler conversion on. He had it until he moved to AUS in 2004. Then my dad bought it. My Dad blew the motor on about 114 000 Km. The Non Turbo motor could take all the power. He then replaced the motor with a UD 40 Motor. Which is the TD 42 motor if i understand correctly. I bought it from him in 2016. He only used it for weekend driving.

I always had to watch the heat gauge when driving uphills on hot days, but managed the problem. Then i bought a Conqueror Companion. I had endless problems with the car getting hot. I then joined the forum and after having a look decided to make contact with Michael. He told me to Fit a Madman on so we can see what the EGT's are doing. After that we saw that the EGT's are quite high and that the turbo only kicked in at 3000 rpm. So i took the car to him.

We decided to take the turbo off and replace it with a smaller turbo that will kick in much earlier. We also added a 3 inch VIPER exhaust. That bought the EGT's down quite a lot. I was now running @ 120Km/hr on the highway at 380 - 450 degrees EGT. It was almost 100 degrees lower than before. He wanted to change more stuff but i didnt have the $$$$. On Long uphills the EGT's went very quick to 550-600 degrees.

I went to Namibia twice and both times i was pulling my trailer. When it got hot during the days i had to watch the water temps. Normally they would be in the 82-86 degrees on a normal day not towing. When pulling the trailer it will go up to 90 -96 degrees. Not leaving much room when a hill approaches to keep it less that 105. I always had to gear back then to second and full revs climb the hill. This became very annoying.

Last month i phoned Michael again. I told him that my cousin in AUS did a couple of mods on his Patrol he had wonderful results. He added a bigger inter cooler and he changed his air intake manifold.I also spoke to Thinus and then he also thought that it can work. I said lets try that and i took the car to him.

I will post some pics of how my front looked like when the bull bar was removed. Needless to say it was blocked with all the stuff in front.

As you can see it was too full and it must have affected the airflow. Below is a picture of how it looked when everything was off.

Extra holes was drilled into the bull bar for more airflow and the intercooler was mounted in the bull bar. Leaving about 300 mm between the radiator and intercooler.

My diesel pump was calibrated and the boost compensator Pin was replaced with Michael's own pin.

Michael's own design air intake manifold was fitted with a air filter box. 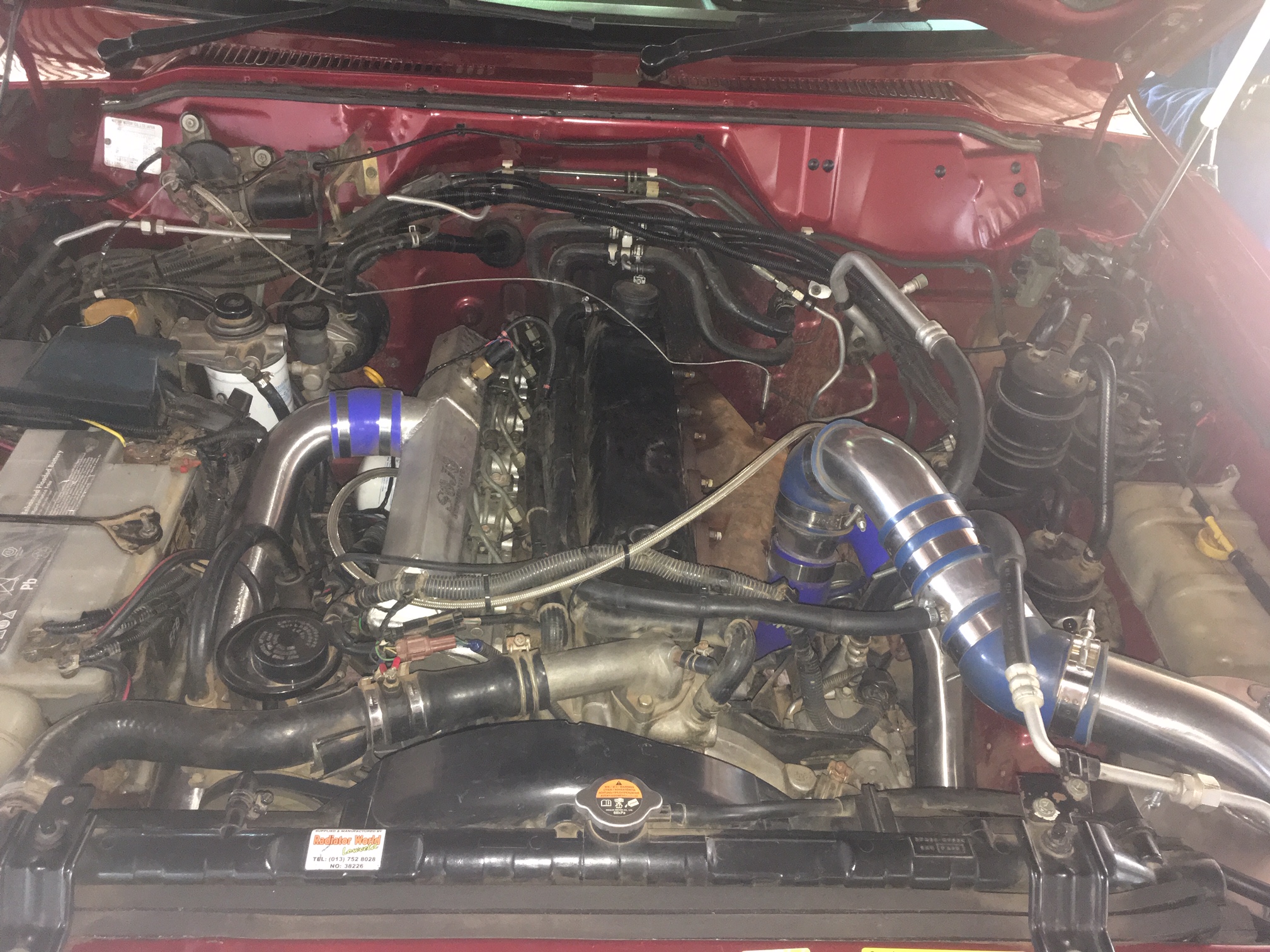 I got the car last Wednesday and drove down from PTA to Schoemanskloof. I was very surprised to drive the whole way 120 -130Km/hr and i could not get the EGT's over 500 and the water temps didnt once go past 91 degrees.

Friday i hooked the companion (1,8ton) and took the road to Palaborwa. The morning temp was cool and i had no isssues with the temps. EGT's was averaging 380 and water temps 86 degrees. After hoedspruit the outside temp was 38 degrees and i thought .... there is no way it will stay cool. From Hoedspruit to the Palaborwa gate the car was not once over 94 degrees( I normally tow at 110Km/hr but for the test i went 120-130Km/hr) . Normally with that kind of outside temps pulling i would have had to look for a shade tree.

Needless to say i am a very happy customer and cant wait to my next trip...
Baie dankie Michael vir die help om my Rooi lorry te fix. 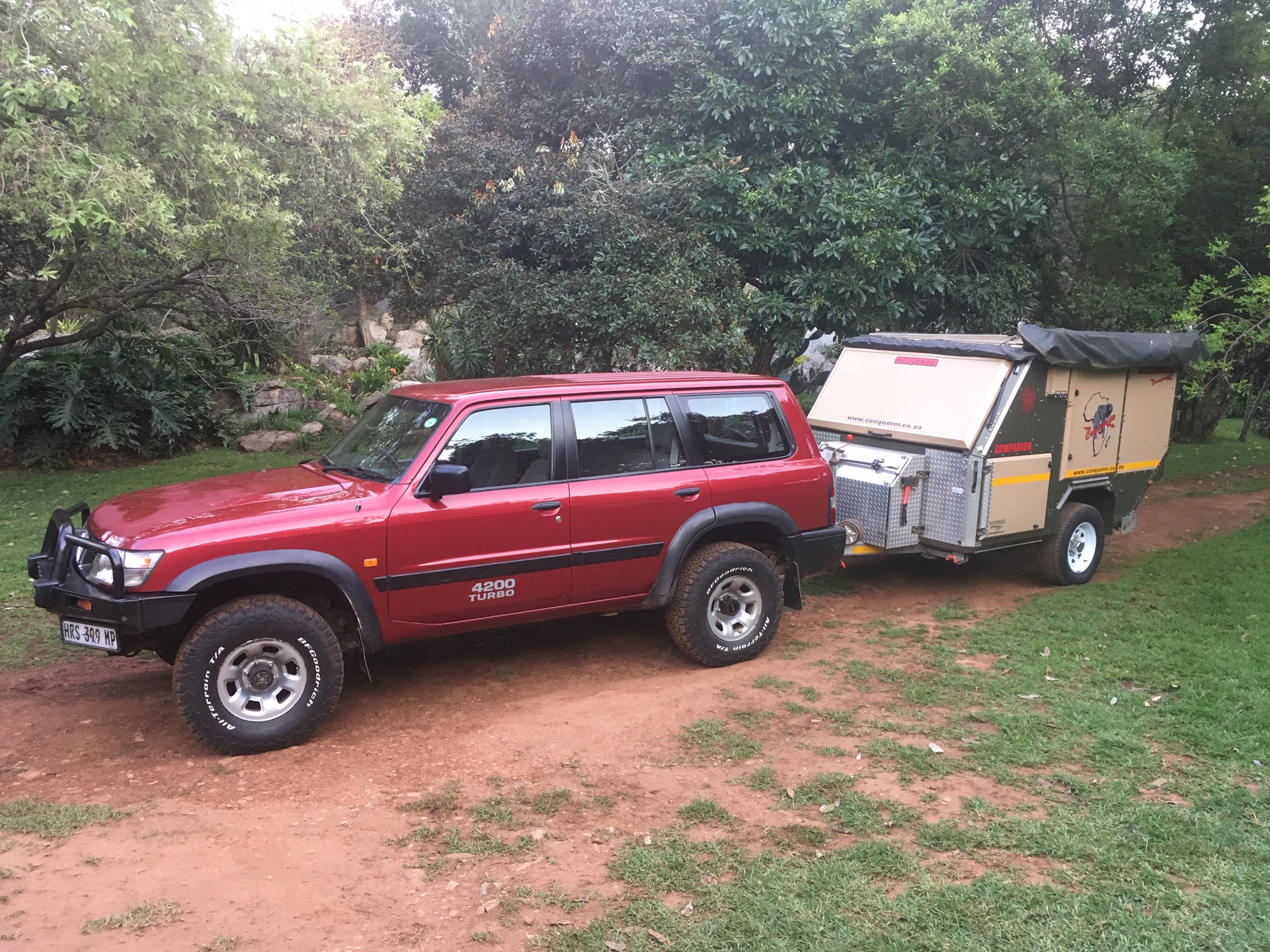 Nice write up, thank you.

Do I understand correctly that your dad put in a factory turbo motor after the blown up motor? ie, all this work was done on a turbo-ready motor?

This is my concern at the moment, my initial plans are to bolt on a turbo to my naturally aspirated diesel, but I think I see a blown up motor in my future.

Yes it was a N/A motor. The new one that was put in is a factory turbo motor. If i understand correctly on a N/A motor a turbo can be fitted but the amount of boost need to be low? Think Michael or Thinus could help you with that.
Top

Yeah, It all depends on a few things. Oil squirters under the pistons being one of the very important factors.

My motor is a TD42 originally N/A, but now with a turbo. However I have the oil squirters under the pistons. I have a theory that Nissan dumped all there odd bits of TD motors here with us in SA, and built up TD42 motors with these bits and pieces. Chances are that your motor will be ok for a mild boost. Mine has done I know for sure 180 000 km with the same old turbo boosting 0.85 bar

I've had my turbo in for 40 000km. Still running n/a pistons. Not a moments trouble, but I watch the EGT's. I have other(silvertop) pistons, I just have to get to fit them
'98 Patrol 4.2D (turbo added)

Yep, I’m combining the full brains trust for this one, hassling any and everyone who will respond to my constant questions on watsapp etc :)

I should be all good.

Graham remember on dawie first motor there were no measuring he has a madman now ...om te meet is om te weet mater