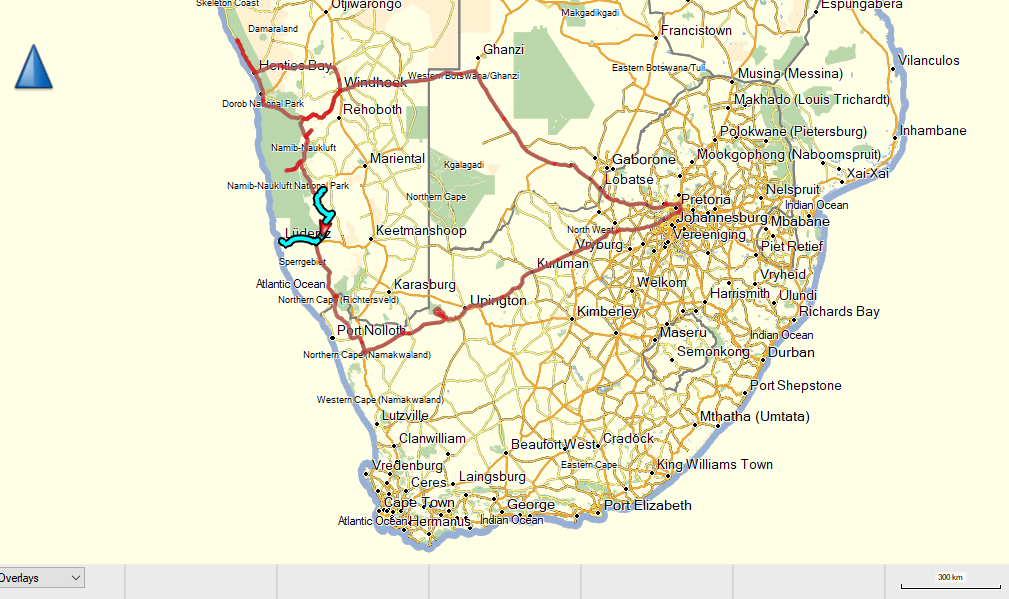 Broke camp early, and headed out back towards Betta. Pondered buying firewood in Betta (I burnt all my bags of firewood the previous night), but decided against it. Luderitz is a big town, they said. I'd get anything I needed, they said... I was wrong... Luderitz' streets get rolled up at 14h00 on a Sunday... Anyways, I'll get to the later. Back to the trip.

Just after Betta, I turned South onto the C27. Nice pretty road. Bunch of smallish passes. The thing I could not work out were the number of game carcases lying next to the road just outside Betta. After chatting with a local farmer in Helmeringhausen, this is apparently as a result of the drought (been this way for 6 years, according to him). Still, I must have seen about 40 or 50 carcases of desert-dwelling antelope (Springbok and Gemsbok) in a very short stretch after Betta.

This accomplishment achieved, I turned around and continued West on the C13 towards Aus.

About 50km from Helmeringhausen, I noticed several vehicles parked next to the road and stopped to hear if they were OK. All German tourists. And needing assistance. Ford Ranger had blown a wheel and they were battling to operate the spare. Als reg - boer maak n plan. Get them sorted, and head back on my way to Aus.

Stopped just before the B4 to reinflate tyres for the tar (the larger portion of the rest of my trip would probably be tar-road), and continue West towards Luderitz.

Stopped at the Wild Horse feeding centre around 20km from Aus, but there were no horses there. There were several grazing next to the road in the distance though. So I hit the road again, getting to Luderitz in the late afternoon. This was where my plan of resupplying sort of fell dead. Virtually everything was closed, and none of the garages were selling braai wood. So I checked into my guest house (self-catering - I stayed there for two evenings) and got some directions of a shop that may be open. They were, and I could resupply a lot, but all firewood and charcoal were sold out, apparently. So I was destined to cook my steak on a pan in the stove for that evening.

I overnighted for two nights in Luderitz, as I wanted the chance to see a bit of the place. I'm not going to post distances and maps, as this specific day they were far too short to really mean anything. Kolmanskuppe is about 10km out of town (you drive past it on the road from Aus) and if you are ever in the area, it is 100% a must see.

It costs ZAR100 for the permit, and this cost includes the tour. Whilst you can amble around the place on your own, I would highly recommend one does the tour simply to get an idea of the place and its history. For example, apparently the first tram system and X-Ray machine in the Southern Hemisphere were located at Kolmanskuppe. Similar amazing items of interest.

In any case, I took the Patrol off to Kolmanskuppe to see the place, did the tour and took some photos. After this, I resupplied at the Spar in town, and took a drive up to Shark Island.

And then I had lunch at Rixies (I think), where I ate fresh, fresh sea food and had the best oysters ever.

Braaied a lamb shank that evening, along with some beer. And had a an early night.

This is a great trip report and fantastic photos. Thank you.
Diem Dulcem Habes
Have a good day
Top 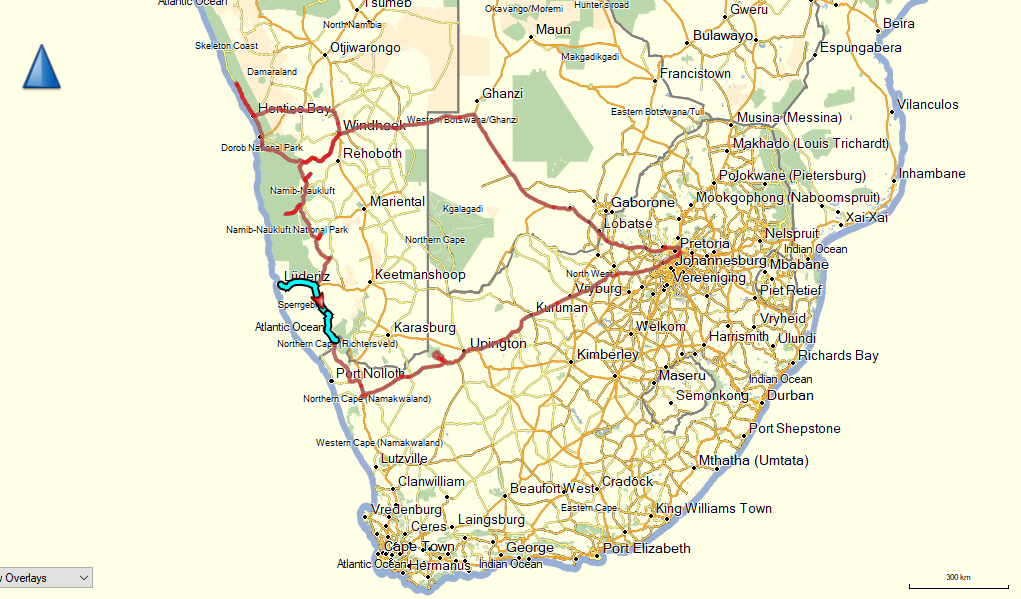 I refuelled in Luderitz before leaving, after which I headed back to Aus on the B4. I was lucky in getting a wild horse right next to the road just before Aus, and managed to get a better picture of one. Refuelled again in Aus - not that it was required, but rather out of habit - I prefer putting fuel in when fuel is available.

Shortly after leaving Aus, I turned South on the C13 (a lovely tar road) towards Rosh Pinah - stopping at a rest stop shortly after turning off for coffee. Whilst there, the guy in charge of maintenance of the picnic stops stopped and asked if I was happy. We would pass each other regularly the entire trip to Rosh Pinah.

Carried on down to Rosh Pinah and refualled there again, after which I made my way down to the ferry at Sendelingsdrif. Basically, one turns off left onto the C13 about 15km outside of Rosh Pinah. The tar road carries on to Oranjemund.

Customs at Sendelingsdrif were rough on the Namibian side. I presume it's because of the border crossing's proximity to the Sperr Gebied, but I basically had to unpack everything. The customs agent even shone his torch into gaps in the trim, removed the ashtray and check under it and similar. Best cases in scenarios like this is just to be patient and remain friendly.

After this, I drove down to the ferry and boarded it before heading back home to ZA. First ferry crossing for me in my life. And it was a bucket list item.

A few notes on border procedures with Sendelingsdrif (coming from Nam).

1: You need to overnight in the Richtersveld park.
2: Your first stop is the SAN Parks office after driving off the ferry. Here you sort out your accommodation, pay your ferry fees (R110 I seem to recall) and get your "exit ticket" which you must hand to the SAP.
3: After this, you can drive to immigration, stop your car and clear immigration.
4: The SAP office is right next door. Clear customs there and hand your "exit ticket" to the officials when you leave.

I was now safely back in ZA, and was booked to camp at the Sendelingsdrif rest camp, but since it was still early, I took a drive along the "Halfmenspas" to see the Richtersveld "Hand of God". This done, I headed back to the rest camp, set up camp and started the fire.

I've read some negative reviews of Sendelingsdrif rest camp, which I think are slightly unwarranted. It's a basic camp, and has everything you need. I think the biggest issue might just be the baboons and the monkeys. In short: do not leave stuff lying around. 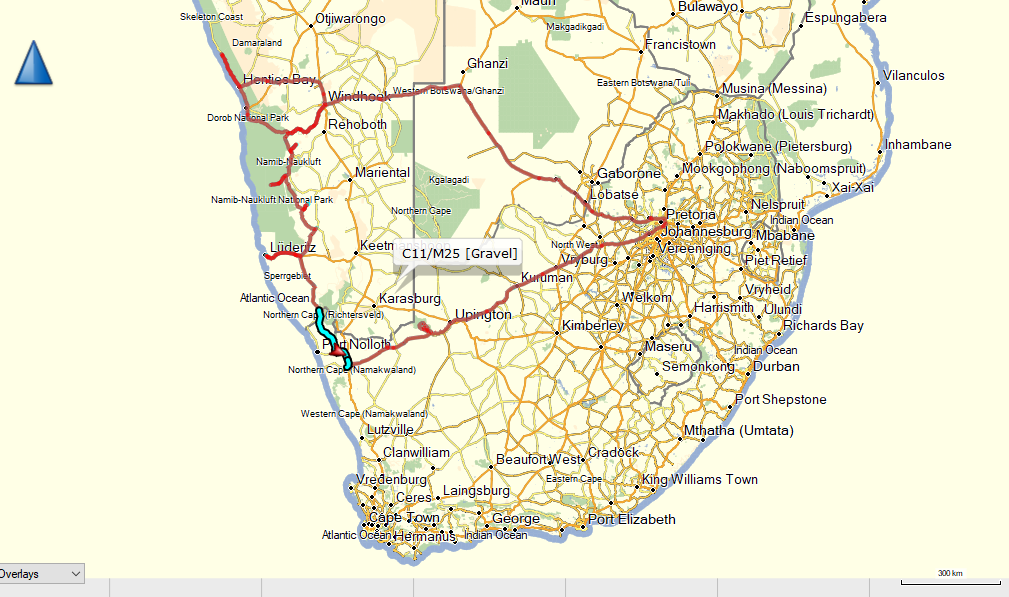 Probably one of my more stressful days, but absolutely beautiful. I took very few photos though...

Broke camp, packed and hit the road. The idea was to head to Lekkersing and out onto the Port Nolloth - Steinkopf road. However, my GPS was a little mishandled during the customs search on the Name side of the border and malfunctioned somewhere after leaving the Rightersveld park. I had downloaded offline maps for the phone, but considering where it was, and the lack of proper roads, it was totally confused as there was no reception. So I grabbed the paper maps, and relied on the tried and tested idea of "dead reckoning" to determine where I was. Grabbed the next road left for what I presumed would be Eksteenfontein, and when I saw the "Holgaat river" starting to merge with the road, I presumed I was on the right track, eventually arriving at Eksteenfontein. *Man*, the road is rough. Rocky, bumpy and several fairly steep inclines and declines. It was the rocks that bothered me though.

Anyways, I arrived safely in Eksteenfontein - albeit I was now in an area where I am not sure if a permit is required. Nevertheless, I carried on towards Steinkopf, joining up with the tar R382. Turned off towards Steinkopf, and restocked my beer there. After that, I headed to Springbok.

I was originally supposed to camp at Modderfontein guest farm. Arrived there to find not a soul around. Furthermore, it was deathly cold, and the temperature had dropped to minus a gazillion degrees. So I headed back to where I had seen another guest farm Moreweg, and they had a chalet available. I decided to opt for the chalet rather than the rooftent, and I've not regretted it since - considering how bitterly cold it was that night. Braaied for supper, had a few beers with Len, the owner of the place. And turned in for the next day.

Thanks Cedric. Still have a thousand odd-kilometres to write up about... But I'll get to that as I can. 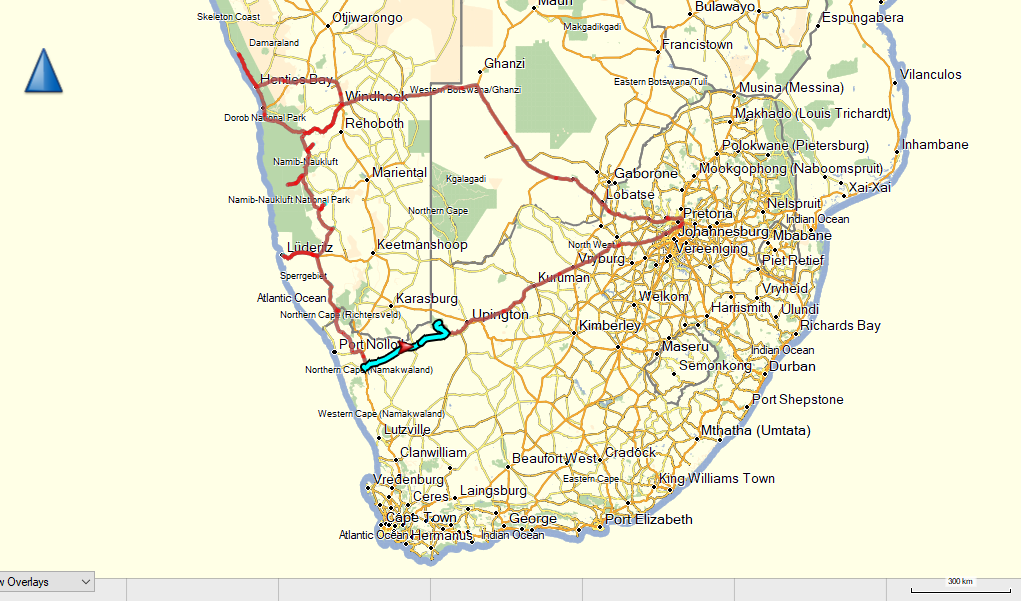 Resupplied, refuelled and drew some cash in Springbok before heading out East on the N14. Just before Pofadder, I turned left into Pella to see the cathedral. Interesting thing about the cathedral is that it was apparently built by two German missionaries from pictures they had in an encyclopedia.

Refuelled again in Pofadder, and then carried on along the N14. I wanted to head into Riemvasmaak via the Blouputs side, so I turned off North-West towards Augrabies on the R359 just before Kakamas. Not having seen Augrabies before, I stopped there briefly to take a peak at the falls.

Then I headed out from Augrabies NP back on the R359, turning North on the Blouputs road about 10km West of the AFNP gate. Having been travelling on tar, and knowing what the road is like once one has crossed the Gariep River and passed "Vredesvallei", I stopped on the Southern side of the river and deflated tyres again. Quite a bit, actually. I think I dropped them to 1.6 bar. Anyways, crossed the river, drove through Vredesvallei. After the first bit of dirt road passes, one reaches a T-junction. One turns right here to get to Riemvasmaak's camp-site. Continued along this way all the way up the escarpment. When one reaches Riemvasmaak, one reaches another T-junction. Turn right towards the camp site and hotsprings. One descends quite a way back down the escarpment into the "kloof" which is where campsites and hotsprings are located.

I was pretty early, so found a fantastic camp site in the river bed. Set up camp. Had a few beers. Braaied dinner.

Another animal encounter... After getting into bed in the roof top tent, I decided to open the eastern flap of the tent so that I could see the sun come up over the kranse should I not have been up and about already. The moon was about half full, and with the lack of light pollution, and the light of the river sand below, one could see very clearly. In this light I observed some pitch black animal sniffling around the fire place. I startled it when I grabbed my torch and got the mosquito mesh open so that I could see what it was. I discussed the with Hendrik, the camp-site manager, the next morning. It must have been a "Grys Muishond" apparently. He says they are permanently busy in the river bed and frequently steal food and stuff lying around. Not that I had any food lying around - it must have just been inspecting my camp site out of interest - but good to bear that in mind should one spend any time there.

Anyways, I spent two nights at Riemvasmaak. I have always loved the place. It's gone a little backward, but if one is rigged for wild camping, it is really not an issue. I believe some of the biggest issues facing them currently are budget, a bit of infighting between the new community members (like Hendrik - the camp-site manager) who have a vision of what they want to do, and the community elders. The fact that they have a massive electricity problem in the "kloof" at the moment also does not help. As they somehow need to get water pumped for the ablutions and similar. In short though, do not expect anything remotely even approaching 1 start camping. But the place has its appeal. For me at any rate.

Second day I spend just lounging around, swimming in the hot pool and generally relaxing before heading back to life in general. 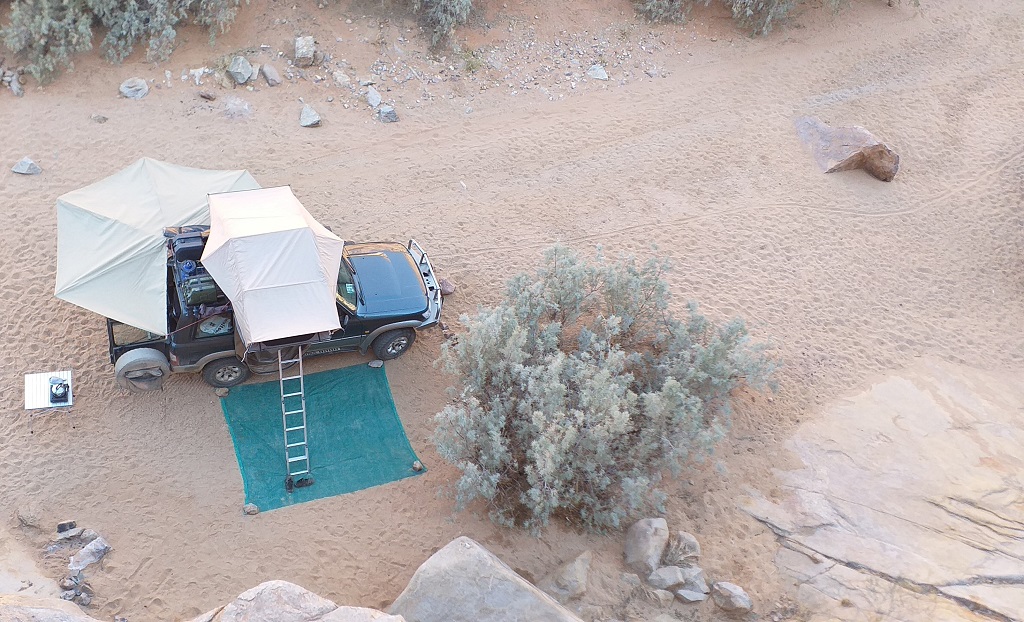