ricster wrote:That gas strut on the door.... where did you get the swivel bracket that fixes to the body? I have a weak gas strut lying in my garage with the swivel that can connect to the door, but not the other one.

I also bought it from canopy center in Silverton
Matthew 6:33 Seek the Kingdom of God above ALL else, and live righteously, and he will give you everything you need.

I have been rethinking the dual battery strategy, there are two options: the direct connect isolator which I have installed or the dc to dc charger ranging from R3000 to R6000 and more for the c-tek one. In the December issue of Drive Out they tested the two systems equally and determined that the dc to dc charger exceeds only after 6 hours of constant driving. It makes sense since the dc to dc are not rated above 30A where a solenoid connect directly and can handle as much as the alternator can output.
Contrary to the December issue of SA4x4 on the trip of the Pajero's and Conquerors the stated that the Pajero has a "smart alternator" and keeps their batteries well charged, while complaining in the same breath that their batteries did not charge well because they were driving slow and rock crawling most of the day. In the tips section the said it is well worth investing in a dc to dc charger because it charges quicker than a direct connection. But their batteries did not charge properly.
So clearly the "smart alternator" and the dc to dc does not work wel together. a dc to dc can charge a more fully than a alternator can since it can bulk charge and float charge, equally I am sure the "smart alternator" can charge the batteries just as well but I believe they were working against each-other.
I believe the best combination would be to install a solenoid with the timing function such as National Luna for about R1000 for the solinoid and then invest in a good 220v charger for when you are at home or camping at a location with 220v. With a combination of possibly solar. My opinion is just after analyzing the results of Drive Out (attached picture), is 10Ah worth an extra R2000?

I have also been thinking that I am sure if i tinkered with a solar controller I would be able to use it for a dc to dc charger since they are much cheaper and both of them do similar jobs of adjusting input wattage to the correct voltage an amperage to charge the battery more efficiently. If one is determined to use a dc to dc.

Please note this in my opinion.
I would love to hear what your opinion is and what setup you installed. 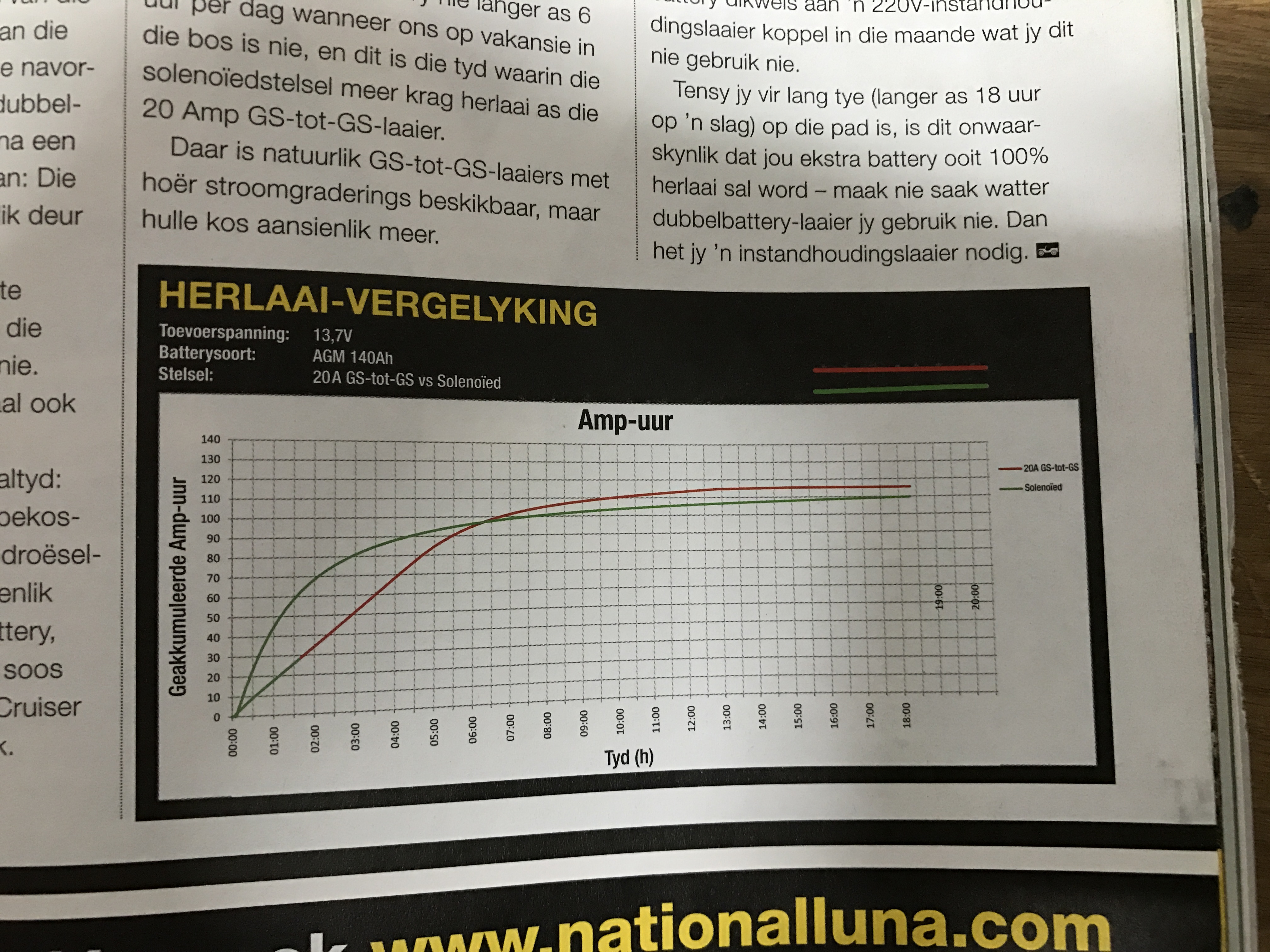 I did not read this particular test, but bear in mind that a test can be designed to "prove" that a series land-rover is better than a Y61.

I believe the choice of charger depends very much on the type of battery you fit as the second battery.

A deep-cycle battery will not normally charge fully from a vehicle alternator, no matter how smart. The reason is that a deep-cycle wants to charge at relatively higher voltage than a standard crank battery, which is what the alternator is designed for, and if the voltage is raised than that will shorten the life of the car's crank battery. The same is true to a slightly lesser extent of a lead crystal battery.

I believe that, if you want to use a deep-cycle or lead-drystal battery, you need to use a Dc-Dc charger for best results.

On the other hand, if you want to use a crank battery as your second battery, you are probably better off connecting it straight to the alternator (via a solenoid or whatever other method takes your fancy).

The thing is that, although a direct connection may charge even a deep-cycle faster if it is very flat, you won't get it past 80% of capacity, which means you start every night at a disadvantage. Also, the deep-cycle batteries don't like charging at very high rates, and charging them quickly will reduce their life expectancy.

There are two more things I need to say specifically about the National Luna system. Firstly, I have personally seen a voltage drop of up to 1v over the solenoid they use once it gets a couple of years old, and secondly, once the voltage of the second battery drops below the switch-off point, the National Luna system doesn't want to charge. It drops out if the amperage gets too high. It is possible to gyppo the system by connecting the two low-current poles of the solenoid together. If a direct-charge system is required, I much prefer the PBE system.

Any chance of a list of parts for the job & size/NM of the strut?

Maybe some measurements too please?