When I bought my Patrol in January this year I noticed a couple of minor problems, but unfortunately missed the really serious stuff. That set me back a pretty penny, but thanks to the generosity of the members on this forum I am back on the road again. This meant though that I had to attend to the long list, I think it is no longer growing, of minor items myself as it was no longer economical to throw money at someone else.

One of these items was the airbag light flashing, which is common for Patrols of this vintage, 2004 4.8.

Error codes
First order of business was to determine what the error code was, and even more important, what it meant.

In order to determine the error code the Patrol needs to be set to diagnostic mode. You can either pay someone money for this, or follow the following easy steps.
1) Put the key in the ignition.
2) Turn the key to the on position, but do not start the Patrol.
3) Watch the cluster and wait for the airbag light to go out. As soon as it is no longer illuminated turn the key to accessories (one notch back).
4) Repeat steps 2 and 3 four times, allowing the airbag light to illuminate and switching off the ignition as soon as it is no longer illuminated.
5) After repeating the above four times, as all the guides on the Internet have already demonstrated, turn the ignition to on again and wait for the code to be flashed.

In my case, it was a sequence of one long flash, followed by two short flashes, and then some more flashes that I did not understand at the time.

The video above shows the error code once the Patrol was in diagnostic mode. Notice the one long flash and then the two short flashes. Ignore the flashes afterwards, I'll get to them briefly later.

According to Googlevarsity one long flash followed by two short flashes corresponds to the airbag in the steering wheel, which is what I suspected from the start. To further support this the cruise control was also not operational, i.e., two of the components supposed to pass through the clock spring did not work. Surprisingly the hooter was still functional.

Disassembly
I was quite certain the clock spring was the culprit so I started disassembly. In order to remove the steering wheel the airbag itself needs to come out first.

First things first, disconnect the battery. There should be no power to the airbag, but other items may be powered. 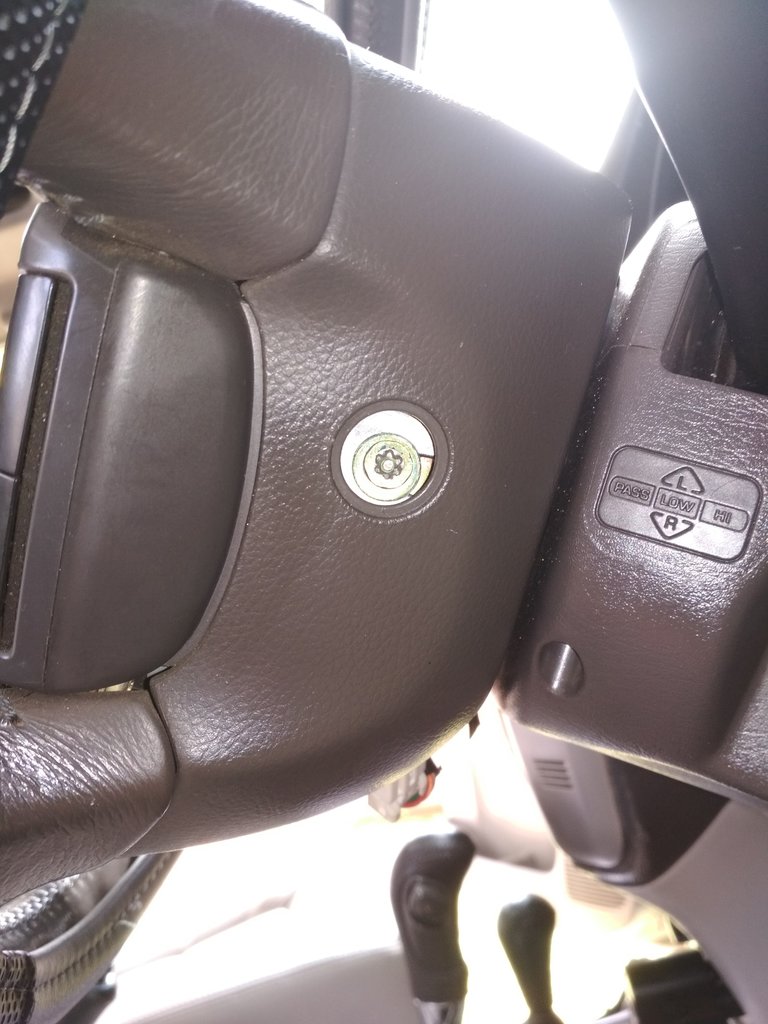 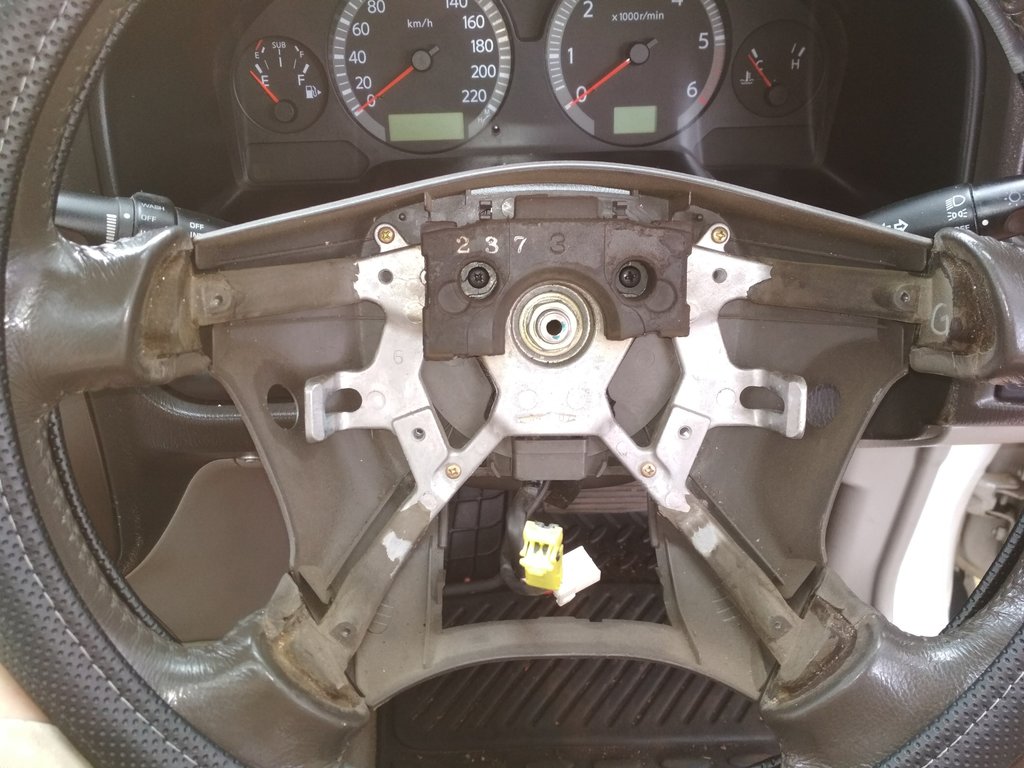 With the airbag removed the steering wheel can be removed by undoing the nut with your favourite socket wrench. Firmly hold onto the steering wheel while you undo it as you don't want to break the steering lock which really is not as tough as you think. Don't undo it completely. Once it is loose use the appropriate amount of violence to loosen the steering wheel. If you had removed the nut completely before this step you would likely have suffered a small contusion as it is very tight initially but accelerates rapidly to your face when it comes loose. 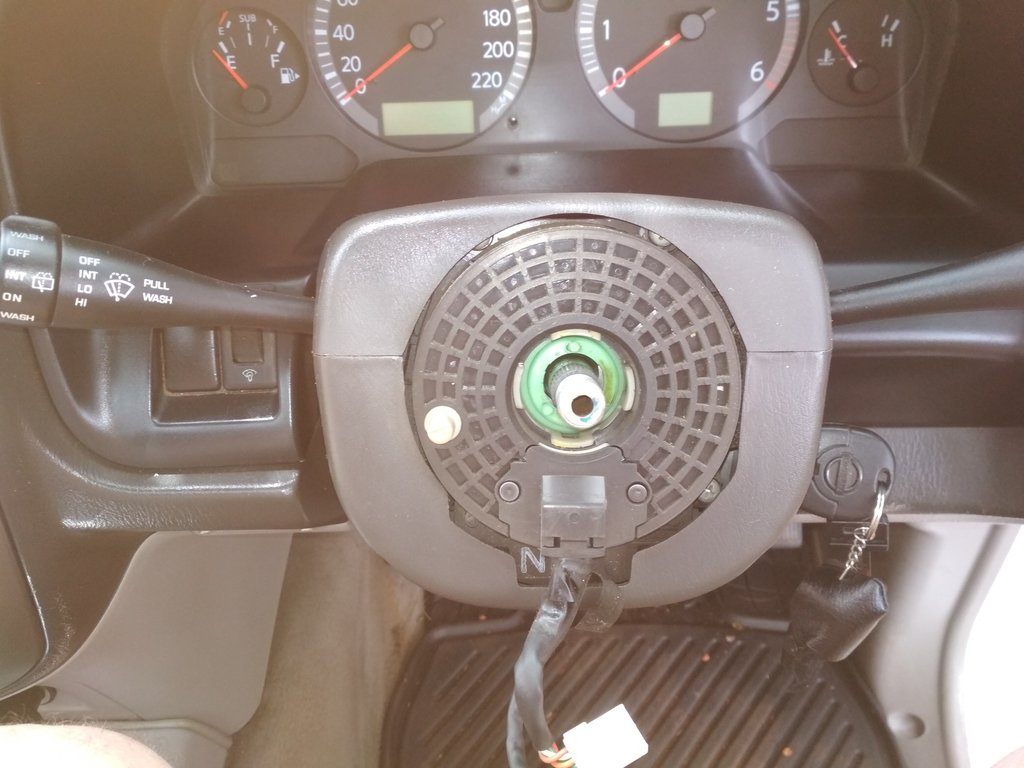 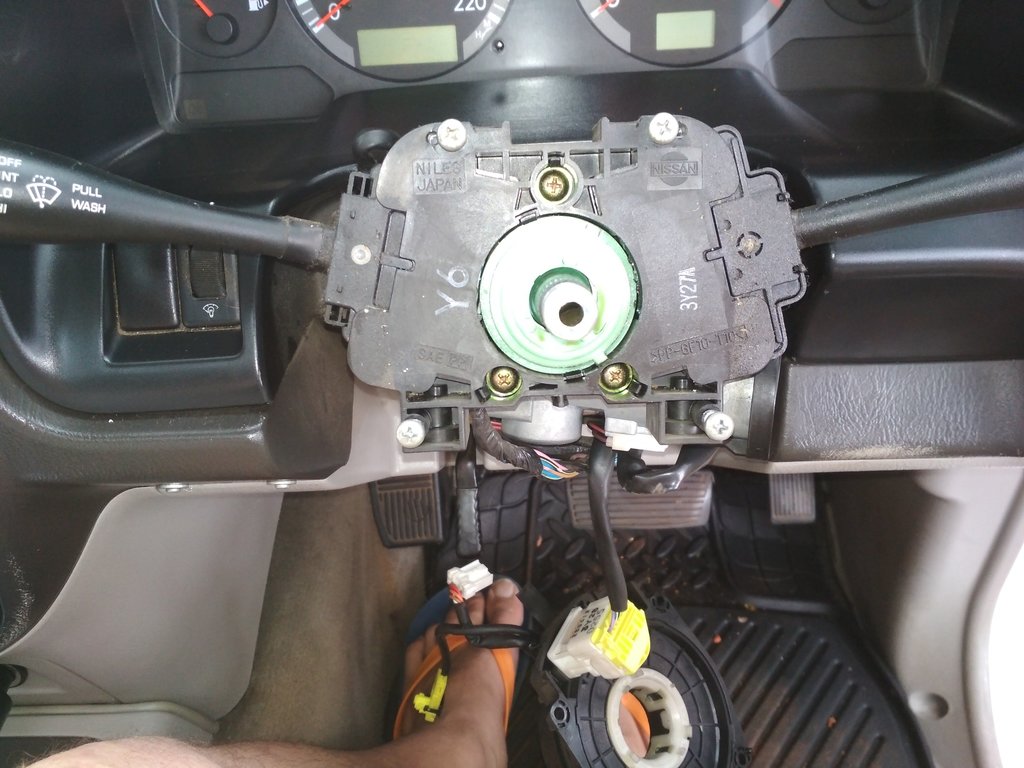 There is one remaining plug holding the clock spring in place. Once disconnected the clock spring is ready to be inspected. Notice the green plastic surrounding the steering shaft. It is important to keep its alignment in place as it terminates the turn signal, so a misalignment here means the turn signal will not terminate at the correct steering wheel angle. Notice the three bumps. There are three holes in the steering wheel that must line up with the when reassembling. 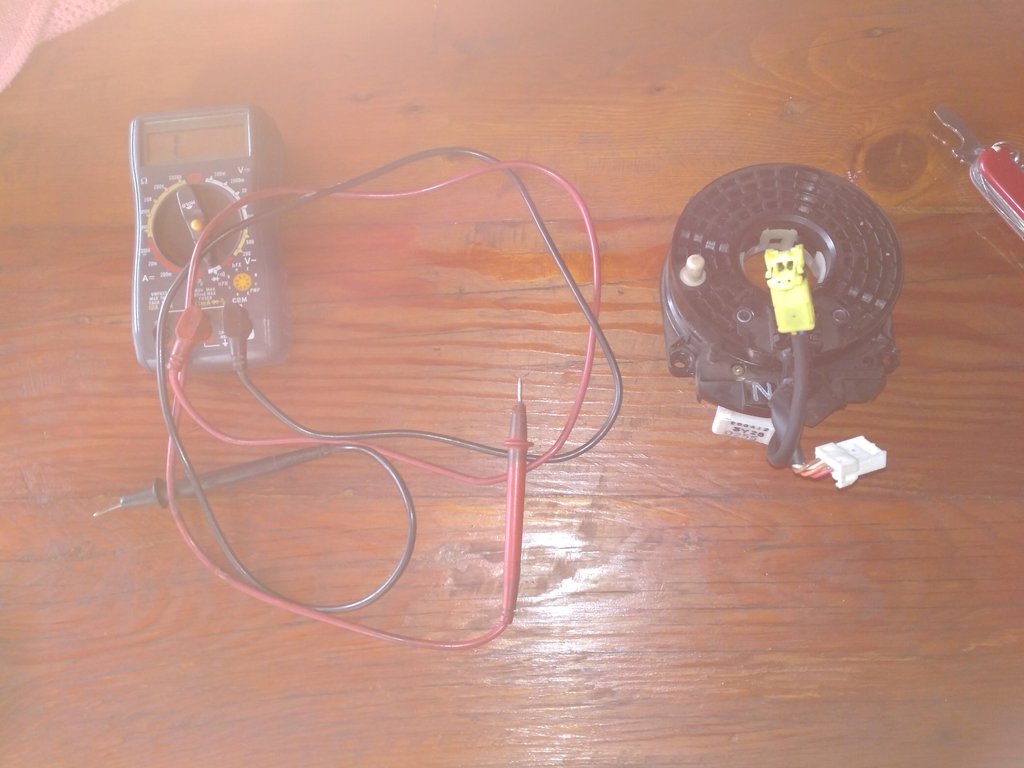 You can safely use a continuity tester on the clock spring as there are no active components that can get damaged here. Do note that you should not use a multimeter on the airbag as the small current might cause it to deploy. The clock spring is held in place with a small plastic clip in the center that can be popped off. Once off the clock spring breaks into two pieces, connected by a ribbon cable. 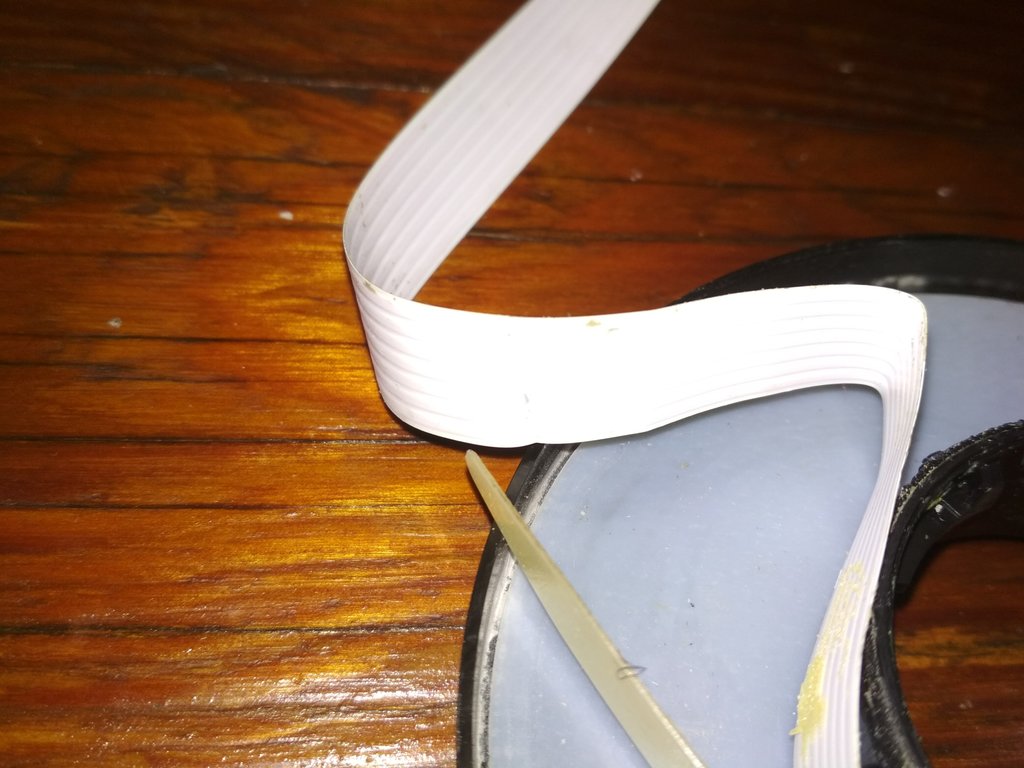 There is a 180 degree bend on the inner radius for reasons I cannot explain. It seems obvious that it would break here at some point. With the multimeter I detected that all but one of the seven tracks had broken here, explaining why the hooter was still functional. 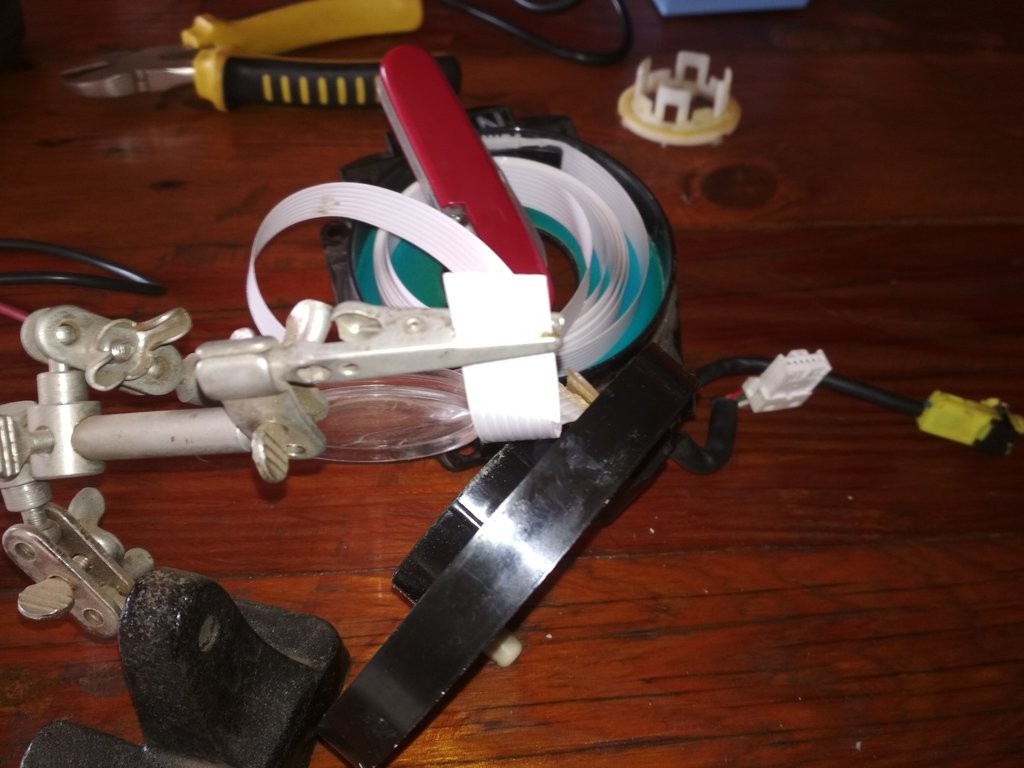 I flattened the cable at the bend, completely severing the remaining track and used small scissors to trim the ends. With a slight overlap I used my soldering iron to solder each track. I applied some epoxy and insolation tape to secure the two together in the hopes the next fracture would be elsewhere. Unfortunately I forgot to take a photo of the end product.

I reassembled everything in reverse order ensuring the alignment of the steering wheel with the clock spring. Make sure it can do two complete turns in either direction otherwise you will snap the ribbon off with the first sharp turn. Also make sure the green plastic bit is aligned correctly with the steering wheel otherwise your turn signals will not terminate at the correct angle and you'll have to disassemble everything again the way I did.


So that is the short of it. Aside from waiting for a neighbour to arrive with the necessary torx bit the whole process was complete in about two hours. Knowing what I know now it will probably take less than 30 minutes start to finish.


Regarding the error codes, once the clock spring was repaired I expected no flashing airbag light, but to my disappointment it kept on flashing. On closer inspection it seemed to be two longish flashed followed by two short flashed. Much Googling later it appeared it to be the code for the passenger SRS side airbag. Another forum member here detailed how he pulled through a new cable for his seat so I will not repeat the process here.

That's it, I hope this will be of benefit to someone else. 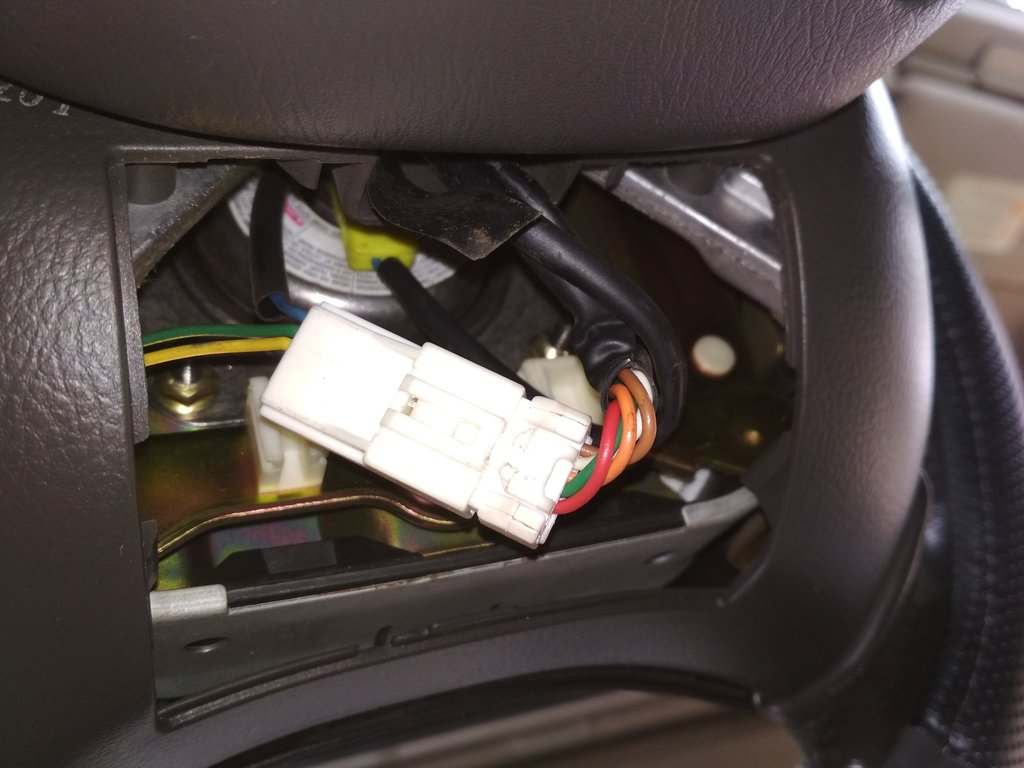 Paul, so does everything else work now?

I had the same issue with my Pathfinder, so for US$23 I ordered clock spring from overseas on Ebay, only to discover that the RHD one differs from the LHD one that arrived here. Mine is clearly marked with a big R, the one from Ebay, had a big L on it, so I could not use it. It is now lying in a drawer in the study. In my case only the airbag light flashed (only the bag is not functional), everything else (including cruise and radio controls) still worked!

I bought a new one (hugely expensive) from Nissan, fitted it and about a month later the airbag light started flashing again (electrical components do not come with a warranty), again only affecting the airbag. I have just ignored the light since then. I lived through driving a car without airbags in the 70's, 80s and 90s, so why worry about it now?

I have however found out that you can order a new ribbon cable off Ebay for about US$5, some of the guys on the 4x4 Community forum did this, and fitted the imported cable. Theirs now work perfectly!! I suppose I could strip the ribbon cable off the one lying in the drawer.

I have just not had the energy to do this.

Fortunately my 3.0Di Patrol is the GL version, so the airbag and hooter are the only things that work through the Clock Spring. So far that is still OK, no flashing lights.......
Top

Malcolm, yes, everything works now. Cruise control, airbag and hooter work 100%. I thought about replacing the clock spring, but with all the other costs I decided to fix it. It seems the ribbon starts cracking from the side facing the driver, so this affects the airbag first as its track is right at the top somewhere, then the cruise control and last to go is the hooter. If the glue holds there should not be any stress on the ribbon in that spot again.

I didn't look at the ends of the ribbon that much but it should be easy enough to replace it. That blinking light is just way too annoying to leave it flashing.


I bought a new one (hugely expensive) from Nissan, fitted it and about a month later the airbag light started flashing again (electrical components do not come with a warranty), again only affecting the airbag. I have just ignored the light since then. I lived through driving a car without airbags in the 70's, 80s and 90s, so why worry about it now?

Did you confirm the error code is for the steering wheel airbag? If you reset it, does the same error code reappear?

In my case, after fixing the clock spring the passenger airbag in the seat triggered the blinking light. Bypassing the broken wire under the seat I haven't had any warning lights pop up.
2004 Nissan Patrol 4.8
2006 Nissan Hardbody 2.4 D/C 4x4
Top

"Did you confirm the error code is for the steering wheel airbag? If you reset it, does the same error code reappear?"

Yes, I did. my mechanic cleared it, but it came back within 100m, so that is when I replaced the whole unit. The cost was R4.8k, just for the part, 3 or 4 years ago!! Then the light came back after just more than a week, again my mechanic confirmed it was the airbag on the steering wheel and again he reset it, just for it to return just down the road.

By then, just thinking of another R4.8k, made me realise that I COULD live with it......
Top

That is very annoying. Do you by any chance have the clock spring your mechanic removed. If the symptoms returned after 100 m perhaps it was not the culprit. I'd love to test it and see if it is indeed broken.
2004 Nissan Patrol 4.8
2006 Nissan Hardbody 2.4 D/C 4x4
Top

AFTER the first light flashing, and the first reset on each unit, the light came back in about 100m. I think you misunderstood
Top
Post Reply
7 posts • Page 1 of 1