petri oosthuizen wrote:I got a walletjie on a dam wall, VERY car that I've owned over 12 years on that farmpie bumped its gat on that walletjie - except a Suzuki Jeep. And this Patrol.
Just a quick quick comparison between this 98 and a 98 EFI (I've had a few)........and I'm NO expert please guys, just my humble observation:
1) Cruiser EFI has more low down grunt than the Trol I think.
2) Space inside about the same, I think the EFI might have a liiiiitttle bit more packing space at the back.
3) Trol has MUCH more comfy seats than the EFI
4) Trol suspension WAY better, all 4 wheels stay on the grip
5) EFI has 2 lockers vs the Trol's one
6) Fuel consumption - both are heavy.
7) Trol's engine somehow feels more "fine", and revs like hell - more than 5000 RPM!!!!!!
8) EFI has great low down grunt......but I think the Trol has a more flat torque over more RPM's
9) This Trol is far, far better equipped inside than a GX EFI........leather, sunroof, 7 seats, etc etc etc
10) Trol's diffs just look better and bigger
11) Trol's Auto Lock hubs are VERY nice.....even better than the brand new Land Cruiser's. The LC's hubs can only be locked in Auto when completely stationary - the Trol's up to 40 km/h.
12) Trol has quite lower RPM's at 120.......about 2600, while the EFI sits at around 3000.......but the EFI holds 5th better on inclines than the Trol I think.
13) Price - this retails at around R 100 000. A similar GX EFI will cost you R 50 000 more - at least.


Petri You have tried the rest .....now you got the BEST

Petri, over the years ive read many hundreds of your posts on the LC forum and enjoyed your insight and comments, as i know you have driven more 4x4's than most of us in this country.

I particularly enjoyed your comments on page one of this thread regarding the differences you found between the two. Good write up petri.

Welcome to our forum and please continue to hang about even if you decide to sell the patrol, as you may find it encourages you to look for another one, maybe a 4.8 or even a 4.2TDI.

One thing i love about patrols, amongst many more important things, is that we dont find it necessary to get involved in camp fire disputes between LC and LR issues.... we sit back and quietly smile, staying out of it all.... the next day we drive hard and drive home without anything going wrong with our Patrols... every time.
'07 Patrol Pickup TD42 N/A,285's KM2,3" Lift,ONCA Bars,Warn High Mount,Alu Canopy, and some other Stuff.
Top

Thanks for the kind words Russ.
I'm not bashing a brand - cant afford to, I'm selling the damn things.

But ja......sometimes, one has this specific assumption that X must be better than Y, not because X is expensive, but because Y is so cheap. And you know the thing about assumptions.
Hell, a 2009 VX 200P with 72 000 km will cost you at least R 600 000.
A 2008 GRX 4800 with 72 000 km is now on sale, at a dealer, at R 270 000.
That's less than half price.
Assumption??? The cheaper one is inferior. We dunno why, but it MUST be inferior at less than half price. Even if it has a bullet proof engine, SFA with excellent suspension,capability, rugged reliability,a world wide following and Sherman tank diffs.

That's how stupid some assumptions are - and I was perhaps the biggest "assumer" of them all.
"Fear?? Looking over at Joe Louis' corner, and knowing he wants to go home early tonight"..........Max Baer
Top

There are definitely things i absolutely love about cruisers, particulalry the 70 series range and the 105 , but then again, there's many many things i love about Patrols,.... The cruiser im paying more for something than i should, the patrol im paying less for something than i should... i love them both, but at my time of purchase i was looking for either a Patrol or a Cruiser (i have always wanted a patrol but was more than happy to find a good 79 series), and what i could obtain with my allowance at that time gave me a demo model patrol 4.2D in mint condition with a long list of serious overlanding nissan factory fitted extras, whilst the nearest cruiser for my money was basically 180 000km ex farm vehicle bog standard 5 years older than the patrol..... I asked myself what benefit i would be acquiring over the patrol should i fork out for the old cruiser... well, needless to say i own a patrol.

@ Russ.... " One thing i love about patrols, amongst many more important things, is that we dont find it necessary to get involved in camp fire disputes between LC and LR issues.... we sit back and quietly smile, staying out of it all.... the next day we drive hard and drive home without anything going wrong with our Patrols... every time. "...... 100% agreed..... well said mate !!!

Again well said Petri, and basically follows what both Russ and I said that we are generally very happy go lucky people, and even though we tease other drivers of other manufacturers, we are a "family" that just smile at the end of the day cause we know we got the best deal on one off the best 0ff road vehicles in the group of great vehicles.

Started up the Trol yesterday after not using it for a week, and drove around on the farmpie with Sev, my youngest son.
Over and through dongas, I actually ended up playing with it, trying to hang it up on miershope. Much to Sev's delight.
Nee wat.
I'm hooked - totally. I'm using a Patrol, and already looking forward to my next 4x4 - also a Patrol. NO doubt about it.
This thing is ridiculously capable and comfortable off road.
Somehow, that rattle at the back also disappeared. Dunno where it went, but it's gone.
Even Sev tuned me "Jis Pappa, jy't lanklaas so baie van 'n kar gehou".
I'm having a coffee on the farmpie now, waiting for the sun to show, and then I'm off to take another cruise with this car. Like a little Standard Six boy with a new 50cc.

So lekker to see you so chuffed with the vehicle Petri.

Did some thingies this morning to prepare for our Roof of Africa trip next week.
Put in piece of rubber mat at the rear load area, and cut it to extend up to under the rear passengers' footwells. Nou kan ons lekker mors.

And fastened those Frontrunner load bars that Tinus Lotz has organized for me - thanks again Tinus!!
Just a question to you guys.........2 of the load bars are the same height, and one is a little bit higher. Where should the "higher"one be........at the back?? I only noticed it after I fastened them, the high one is now in the middle.
Those load bars are quiet, NO noise coming from them at speed. And very sturdy. I also noticed (I may be wrong here).....but the Patrol has got REALLY thick and strong roof gutters!!
See pics 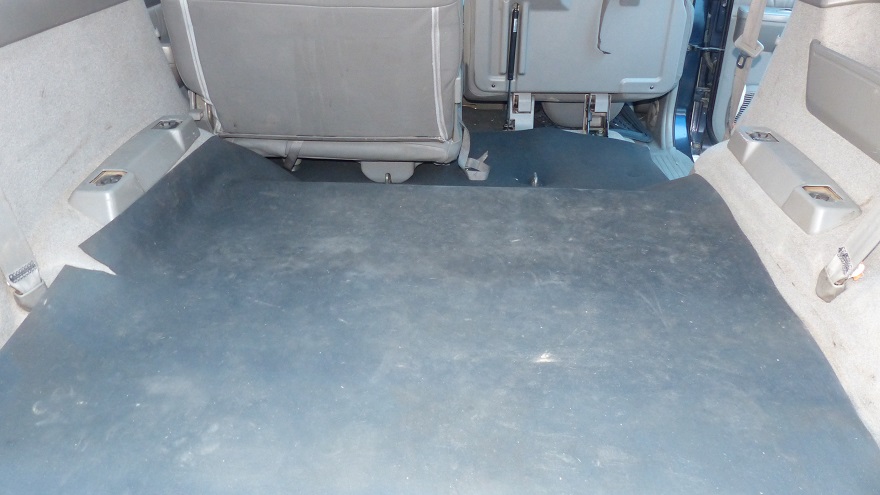 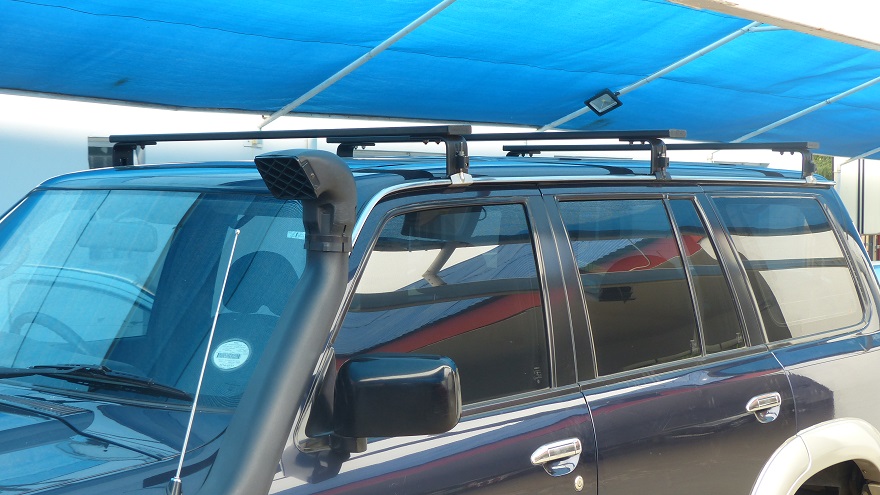 I think the gutters go down slightly at the front, and probably the high bar is intended to be at the front, but I doubt it will make any difference whether you put it at the front or rear, although it probably shouldn't be in the middle.
Mag ons ons kenniskry met lekkerkry aanhoukry.
Top
Post Reply
39 posts