Fitting DRLs to my Patrol,

Fitting DRLs to my Patrol,

I've always wanted to fit Daylight Running Lights (DRLs) to my 4x4 vehicles, for various reasons that I will not be going into here.

The problems with these DRLs is that if not fitted in the correct place ergonomically, it ALWAYS looks added on. One day, I walked into 4x4 Direct in Boksburg and saw the perfect units, neat and compact and the Patrol's front replacement bumper had the perfect place where these could go and where they would not look added on. The housing is thick aluminium fashioned into the pattern of a heat-sink! It is a well made, substantial unit.

My Pathfinder just does not lend itself to fitment anywhere on the front of it. Just as well, as even at their dealer prices (I am a 4x4 Direct sub-dealer), these lights cost over R400 each!, two years ago! (Their prices have since come down to mid R300s)

So I closed my eyes and handed over the plastic. At home I had to grind the substantial aluminium body narrower by about 1mm to fit them where I wanted them to go.

About 3 months later, the left DRL failed, and 4x4 Direct replaced it, telling me I am the second person with a failure on one of these. After about a month, another left DRL failure took me back to them again, just to hear the other guy with the failure, also had a 2nd failure, also on the same side as the first failure on his vehicle (his was on the right though). Again it was replaced for free, and this time the owner of 4x4 Direct Nationally was visiting their Boksburg dealership. (I've known Pieter Pretorius from his days when we both had Terrano's) He was horrified and said he would investigate. I don't know if he did, but later they stocked a slightly different model.

It is a bit of a job to fit them, and I was a bit miffed about all of this. I went away for a weekend, and for the 3rd time, the left DRL failed. Again it was replaced, but with an uprated version, one that could be coded to give white, red, green or yellow light. Again on the first trip, the felt one failed and again it was replaced with one of the "uprated" ones.

When I got back, and during one of my frequent visits to 4x4 Direct, Neil of 4x4 Direct Boksburg said to me it could be the wiring to the left light causing the failure, but to my way of thinking, that is impossible, it is one wire from the DRL relay that I set up, and on the bumper it "T"s, one to the left and one to the right. This time, I swapped the wiring from the "T", the wire that used to go to the left now going to the right and visa versa!

Well, going to Rust de Winter a few weeks ago, again the left DRL failed. By now I'd had enough. There is no logical reason for it!!

Yesterday I happened across some (4 to be exact) large LEDs that Rhett vd Stelt gave me about a year ago. It is something that they sell at Maisey's Plastics where he works. He said I should try them for camping.

Why camping I thought yesterday, why not as DRLs? Even if they fail, they are as cheap as chips at just few bucks each - and easy to replace!!!

So today I fitted them to the Patrol and chucked those expensive DRLs out. I will find some other use for those somewhere, some time in the future.

JUST A NOTE ON LEGISLATION ON DRLs
1. must turn on only via the ignition.
2. front lights only, no rear lights
3. must turn off automatically when the headlights are turned on.

So here are pictures of my labours today, fitting the Rhett specials!!! They look positively great too!!!!! 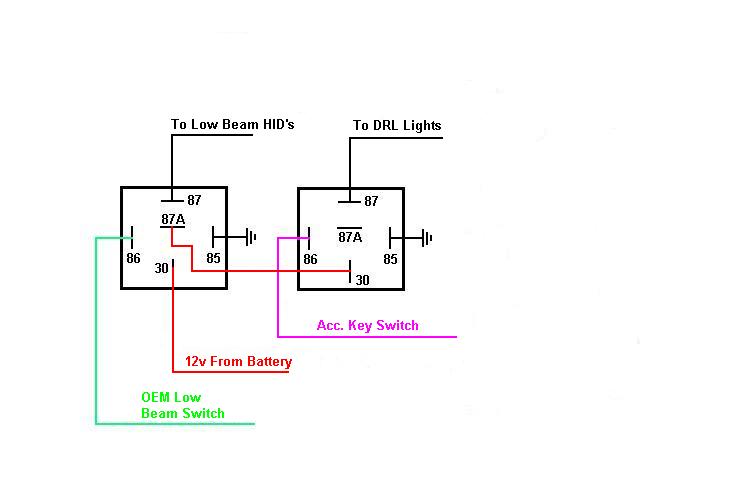 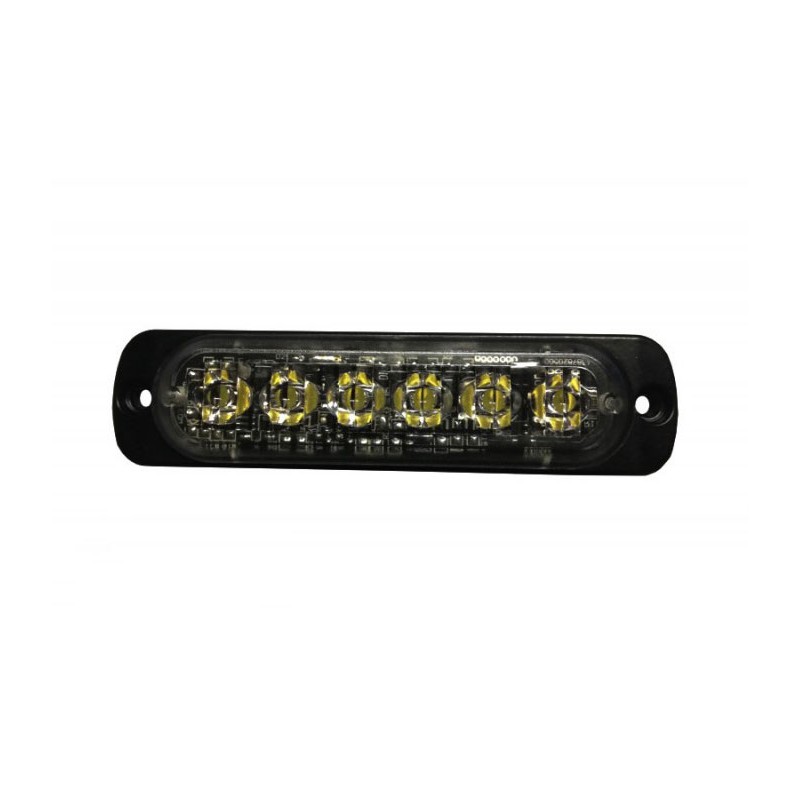 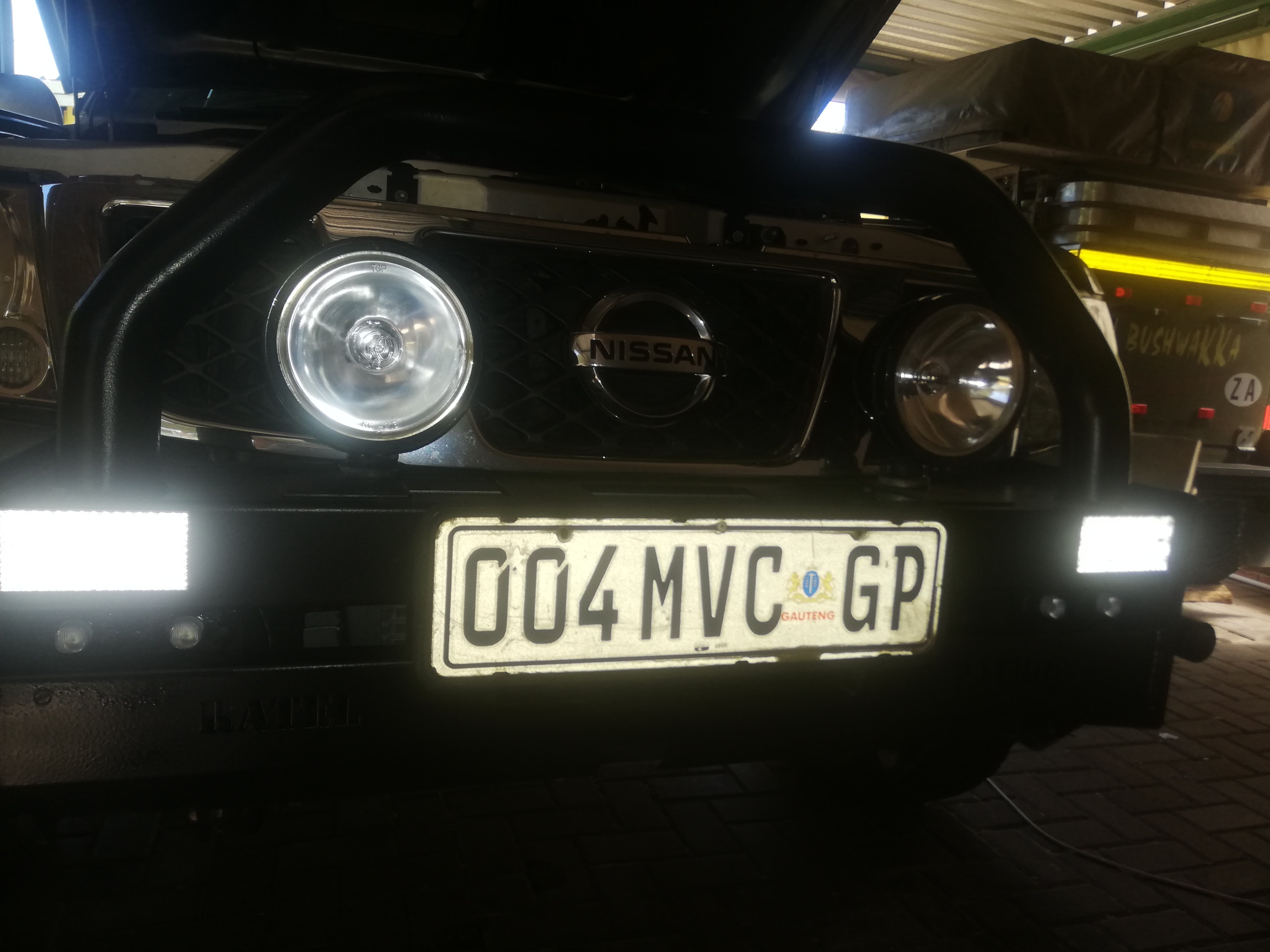 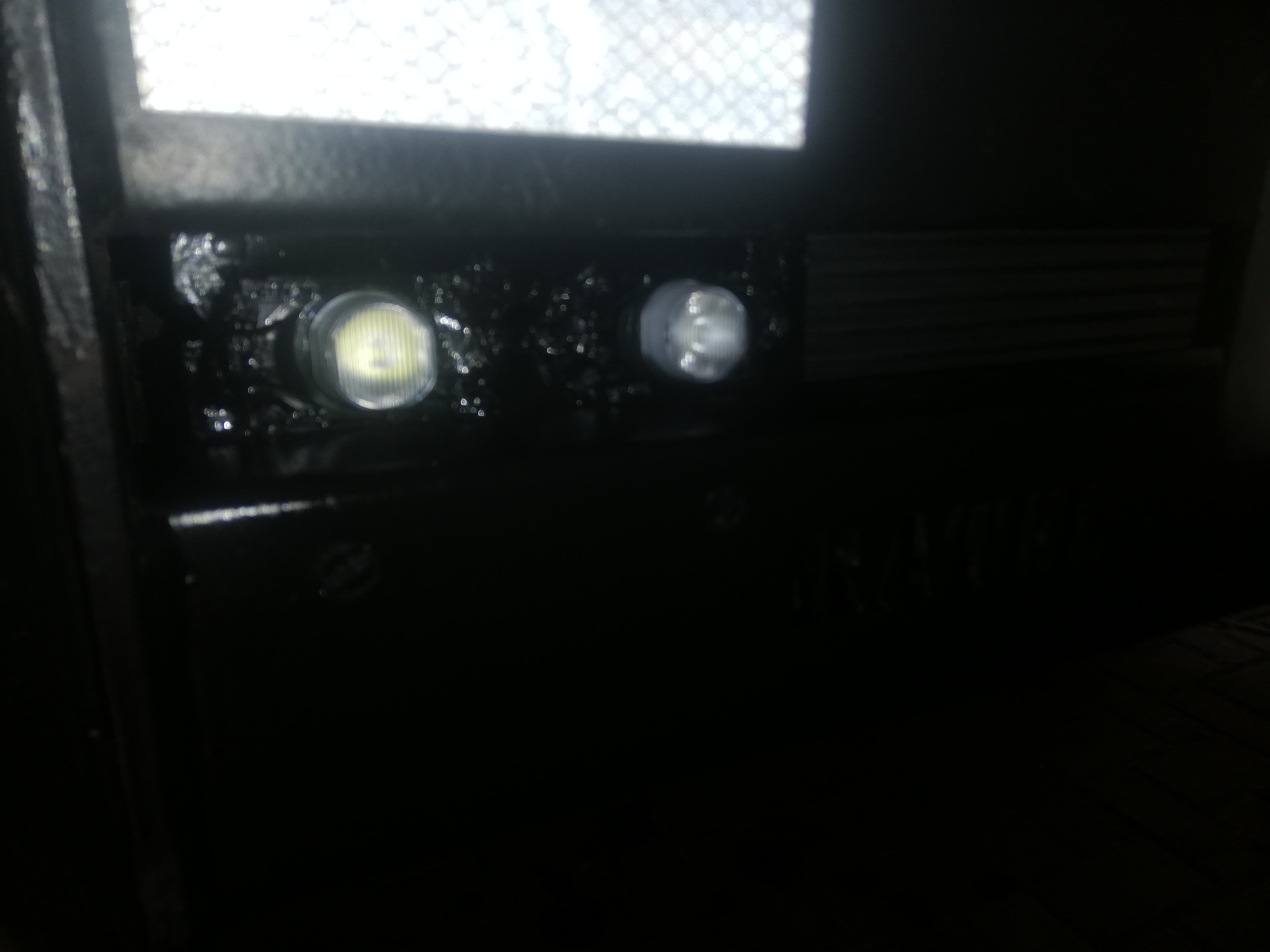 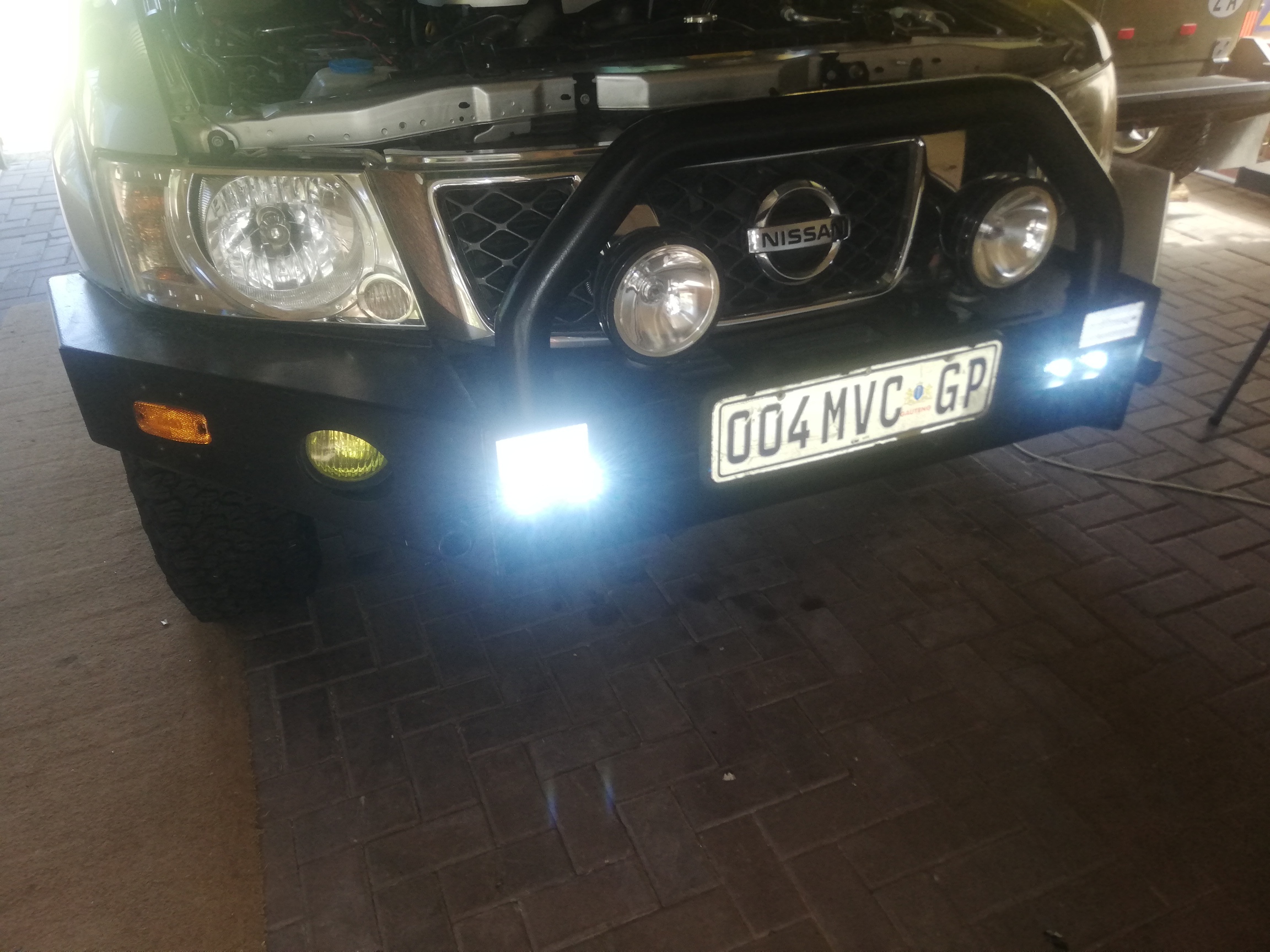 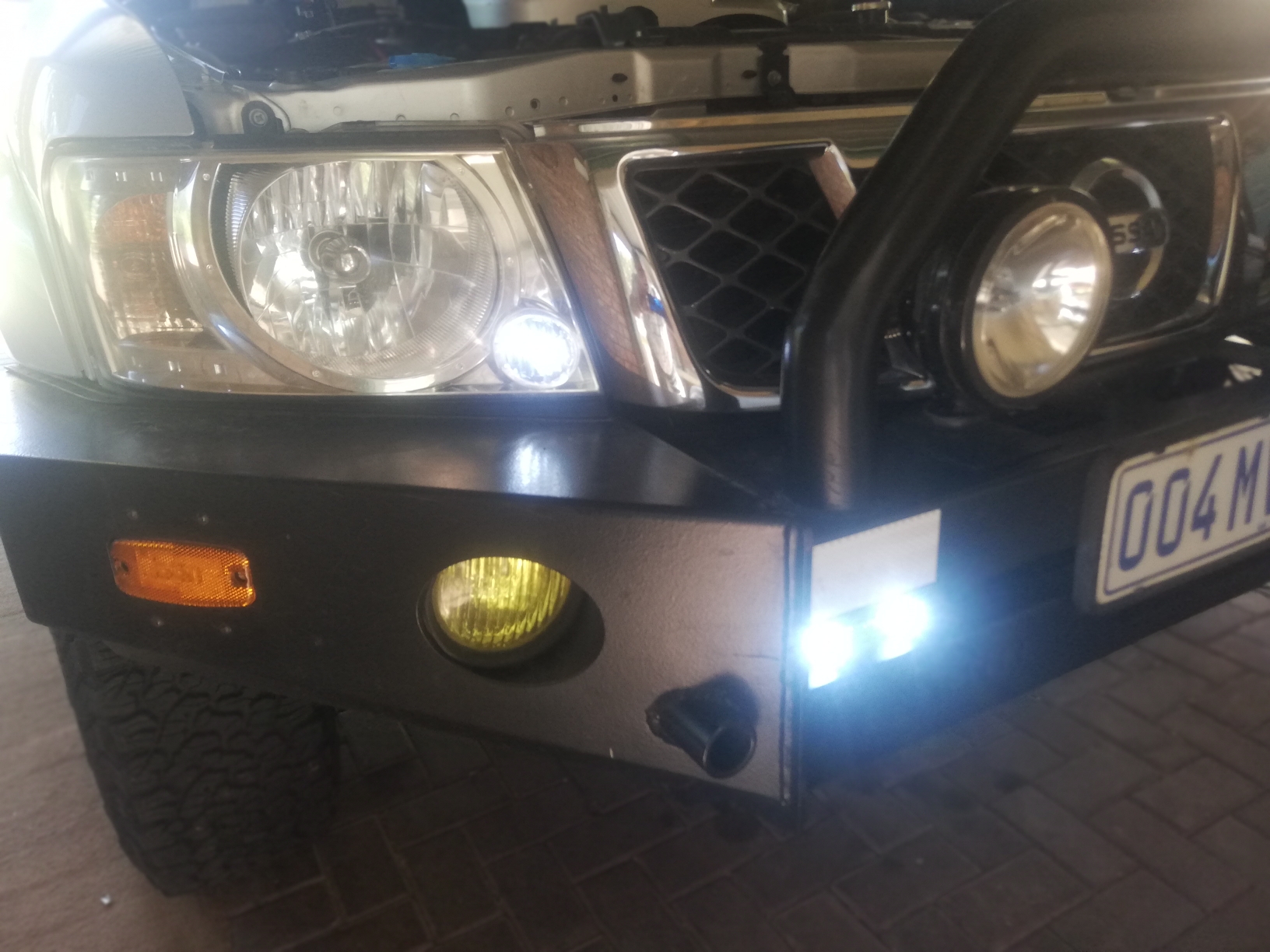 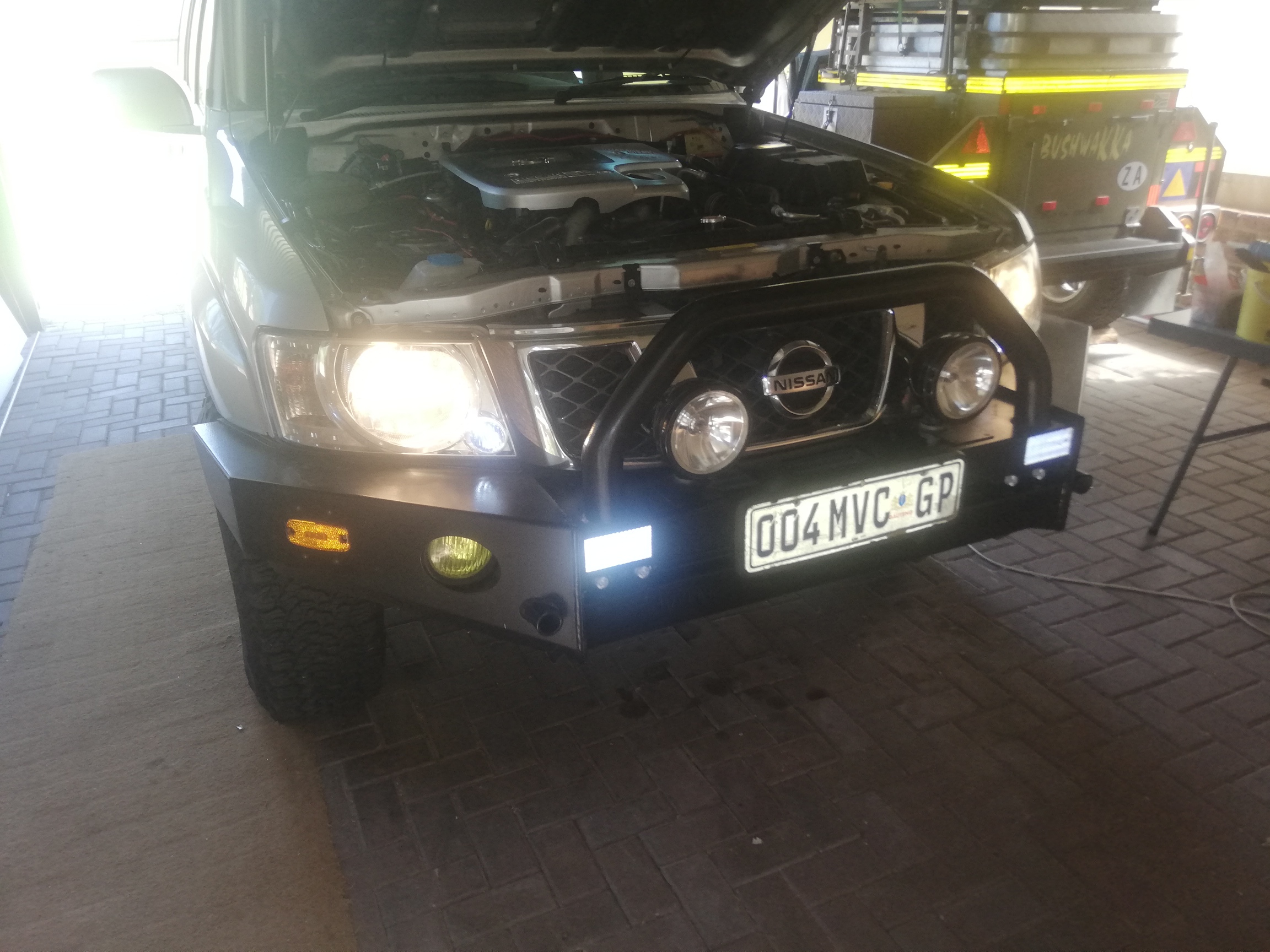 Re: Fitting DRLs to my Patrol,