I am looking towards you guys for good advice. I have had a very big patrol passion al my life. Since visiting the then 'Kalahari Gemsbokpark', today Kgalagadi, with my father, I have been amazed by the metallic red or green and silver box-shape 4.2d Patrols.

Today I am looking to buy a Nissan Patrol myself. I currently drive a Nissan 4x4 (NP300 Hardbody) and I have been as far north as Zambia. The 2.5 Turbo Diesel doing service in that vehicle has done 60 000 km's, sometimes with dirt north of the RSA diesel without any trouble. The engine also uses no oil which I find quite amazing given the severe conditions it has been used under as well as the sheer weight of al the extras. Given the facts, I have great confidence in the Nissan product thus far. Based on capability, I would rate the NP300 as fair at most. Given the abscence of a diff-lock, it really is fair at best.

I am seriously looking at upgrading my current 4x4 to an all solid axle and heavy duty chassis 4x4 with at least a rear diff-lock. I have considered the 4.2 Cruiser 76 based on the almost legendary reliability, even with filthy and unpure diesel, as well as the 2 diff-locks. However, they are scarce and they sell faster than cookies in a hostel. The petrol models do not come in a station wagon and the double cab 4.5 V6 is simply too thirsty. Third choice, a 4.8 GRX Patrol: luxury interior, massive power, coils front and rear, agressive looks but class-trailing tsunami-like fuel consumption.

Now I am starting to look at the 3.0 diesel. In the latest weg there is an article on the improved and revised 3.0 ZD30 engine that replaced the 4.2tdi in the pick-up. The author applauds the improvements made to the 3.0 tdi and recon that it's now reliable. Given the much more efficient fuel consumption of the 3.0 tdi, can you please give me thoughts.

1. Are they now more reliable than years ago?
2. Why is the Patrol outsold 100 to 1 by the Toyota Cruiser Models?
3. Can I buy the 3.0 Patrol second-hand? (I'll wait until I find one)
4. How efficient are they on fuel?
5. Does someone on this forum own a diesel and have they had issues?
6. In terms of Africa, the Weg Magazine claim that they can easily consume dirty diesel.
7. Should I rather buy a high-mileage Toyota Cruiser 79 or 76?

The 4.8 is stunning, but I'll have to buy it and park it in my Garage and look at it daily as if it's a art piece. I can't afford that level of fuel consumption.

What do you folks think?

Johann - The 3.0 Patrl after 2003 is reliable .. Up to 2002 the ECU was standardised on non SA conditions, and here on the Highvelt they tended to over fuel and that caused the 3.0 engine to fail.
I had two -- the 2002 Patrol and 2002 Hard Body with ZD 30 motors .. the Patrol did break [long story, Nissan Dealer and Dastek to blame] but that Hard Body is still running, approaching 300,000 km [Wimpie O is now the lucky owner of BOEZMAN] [AGAROB is also still on this forum ]
Thus -- if you can find a post 2003 Patrol 3,0 in good condition, full service record, AA report and the right colour -- go for it. 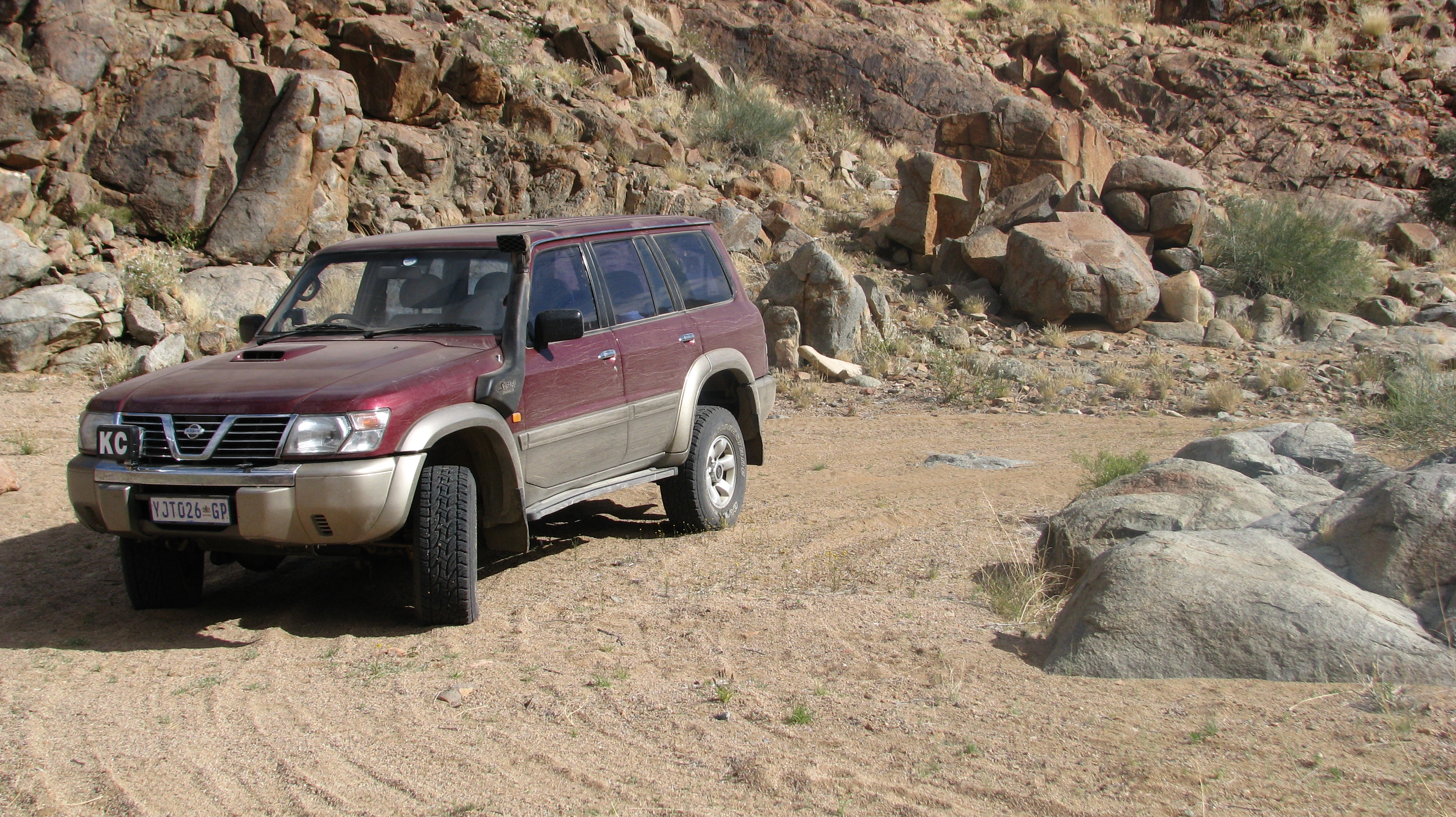 Johann 1984 wrote:Dear Trol Owners,
.....
The 4.8 is stunning, but I'll have to buy it and park it in my Garage and look at it daily as if it's a art piece. I can't afford that level of fuel consumption.


Johan, if you buy a second hand 4.8 (say between 2005 and 2008), you can get them for a ridiculous price nowadays.
You have to go back to the stone age to find a Cruiser for the same price, and then the bearings on all the turning parts of those old machines will be finished too.
The difference in price between say a 2006 4.8 GRX and the equivalent Cruiser will give you years and years and years of petrol money. Someone on this forum have done the sums before. Really many years or fuel money!

As to the 3 litre diesels. I disagree with Oom Mac (Kagiso II) on the date intervals. Mine was 2004 model, and also went up in white/blue smoke. I've heard of a 2005 model also doing it. So not full-proof, but the later models (2005+) are definitely much more reliable.
Skilpad, Shortie & Toro.
Top

I drive a 2013 3.0GL. i bought it new for the price of a tuna. So I cannot comment on reliability first hand " yet". Nissan ran a huge special last year. R196000 discount on mcarthy website. Keep an eye open for specials. Its year end and they need to sel Patrols to make there targets.

I am very happy with my Troll. Yes its not the most powerfull motor and its not fast. But boy is she strong. I had a Prado 150D4D before the trol. Very nice car. Comfy and luxery. But not a hardcore 4x4. Don't care what everybody else says. I drove one.

I got 9km/L on avarage. After fitting 33nch muds i get 7.4km/L avarage. The troll is very comfortable. I have 3 teenagers, so we are always 5 when we travel. And there is loads of space. I will be attempting a trip this year to namib for 3 weeks. I want to try and fit all in and on the trol. I don't want to tow. We will be camping. I' keep you posted

. The trol boosts confidance and by the look on the guys faces when I drive by them I can see that I am being envied by most

aspecialy the older guys. Im still a youngster like oom Mac says.
Its by far the most capabil 4x4 i have ever had. I had a few.
I agree with Alex look for one as close to new as posible. They put the axact same motor in the bakkie patrol this year. I cannot beleive that Nissan can be this stupid IF this was a bad motor. I am however determend to drive this Trol over 500 000k's on the clock.
I planned a trip to namibia and played with figures. 7000km at my 7.4km/L against a modest 5.4km/L and the feul cost was almost R4600 difference. Its half my accomodation money more.

If you troll through this forum, you will quickly discover that I am not the world's greatest fan of Diesel engines with hair driers.

Having said that, I firmly believe that the ZD30 in it's current iteration is as reliable as most other TDI engines fitted to similar vehicles and to bakkies.

On the other hand, consider that when a Patrol person talks about reliability, we are expecting 500k + km. These kind of figures are routinely achieved by all the petrol engines and the 4.2 Diesel, and I simply do not believe the ZD30 or any of it's ilk can compete.

Furthermore, in rough country and with extras fitted, the fuel consumption difference is not as much as one might think, and I firmly believe that if you consider all the running costs, the various options work out similarly at the end of the day, because the diesels are more expensive to maintain and fairly critical of good maintenance.

To sum it up, if I were to buy a 3l Patrol, I would want a relatively new car (less than 5 years old) and one that had an EGT measuring system installed by the original owner (shows that he is aware of the issues and managed them). On the other hand, I would be happy with a '05 4.8 at 1/2 of the money, and with the difference I can drive the wheels off it for several years...

Given your experience with the 4.2 Diesel in your box shape Patrol, would you regard it as a safer buy than a second-hand 3.0 diesel? What milaege can the 4.2 take? The box shape is beautiful, I am however concerned with the constant amount of small repairs required due to decades of wear and tear.

Whats fuel consumption like on the 4.2? Do you still get nice and decent models of that shape? Do they have LSD or locker?

Please keep me posted regarding your vehicle experiences during the Namib trip.

May I ask at which dealership you got the deal on your brand new vehicle?

Johann, mine is a petrol, not a diesel.

There is a guy on this forum (Dungbeetle) who is now very close to or over 600k km with a Y60 (the box shape's name) 4.2 diesel, and another (Raka) with 500k ok. They are definately capable of giving massive mileage.
Grant is the mileage king for the 4.2 TDI,with over 400k km.

The 4.2 gets normally between 1 and 3 km more out of a litre of fuel, given the same mods and driving style. Services are every 5000km, and with a 10l oil capacity and dual filters...

Yes, old cars do require more love more of the time, but the 4.2 was also available in the Y60 up to around 2001, and is an easy retrofit into later cars...
Mag ons ons kenniskry met lekkerkry aanhoukry.
Top

I will do that. The deal was advertised by Mcarthy call a car. The local dealer was willing to do me the same deal. So I got it through the local dealer, thats when I heard about the sales targets.
I checked a few weeks ago and they where running a patrol spesial for 80K less. Just keep your eyes open.

Peter Connan wrote:Johann, mine is a petrol, not a diesel.

There is a guy on this forum (Dungbeetle) who is now very close to or over 600k km with a Y60 (the box shape's name) 4.2 diesel, and another (Raka) with 500k ok. They are definately capable of giving massive mileage.
Grant is the mileage king for the 4.2 TDI,with over 400k km.

The 4.2 gets normally between 1 and 3 km more out of a litre of fuel, given the same mods and driving style. Services are every 5000km, and with a 10l oil capacity and dual filters...

Yes, old cars do require more love more of the time, but the 4.2 was also available in the Y60 up to around 2001, and is an easy retrofit into later cars...

This should read: "available in the Y61 up to around 2001". The Y61 is the shape just after the Y60 or box shape. There are some nice 4.2D Y61 models on Gumtree. Some with Turbo's some in the original state. The 4.2D did not have a turbo as standard. If you find one with a turbo it is more than likely an after market fitment. The 4.2D is very reliable. There are basically no electronics in these engines. All really sturdy mechanical parts.

If you can get a 3.0TDI that was well looked after engine wise, that will be the best choice for fuel usages.

Return to “15. Other Patrol Stuff”